The Loss of Modernization

The task of adapting the fifteenth-century Chester play of the Antichrist into a serviceable twenty-first century playscript raised one large question: “How much of the medieval material do we keep, and how much do we throw away in favor of modern language?” The advantages of modernization are many: the humor is more accessible, the lines are easier to follow, the props and costumes are easier to create, and the performance is easier on the actors. The advantages of holding fast to the medieval materials are only one: the play remains more faithful to its original, a subjective good that supposes the original text is worth remaining faithful to. Still, in a class that’s titled Medieval English Drama in Performance, we can expect that this good is worth pursuing. So the question then becomes: “How important is it to maintain historical accuracy when performing this play?”

This question becomes complicated once we consider how a performance can be historically accurate or not. One approach to this question tries to have costumes, props, and the language of the script mirror their medieval originals. As a class, we unanimously decided that this kind of medievalism was not important to us. We did not attempt to imitate medieval costumes beyond a few touches here and there: the imperial purple in the Antichrist’s robes, the robes worn by Enoch and Elias, and Michael’s breastplate and white attire. Otherwise, no strong attempt was made to emulate medieval costuming. Success would not have been guaranteed had we done so: our knowledge of what medieval actors wore to play their parts is limited, with medieval artwork offering the best sources of information.

Neither did we omit modern clothing or props: our Kings and three undead were dressed in modern garb, Antichrist wore a pair of lime green underwear under his robes, and we used megaphones to comedic effect. Most relevant to the writing of a playscript was the question of language. We retained Middle English and Latin only at certain parts. Prof. Albin speaks Antichrist’s Latin lines for him to comedic effect before quickly being killed with a blowpipe at the beginning of the play. And at the end, the Archangel Michael confronts the Antichrist in the play’s original Middle English. Otherwise, the original language was almost entirely replaced with modern, even contemporary and colloquial, translations. Ultimately, we abandoned strictly historical guidelines for our portrayal, a decision based on a taste, practicality, a lack of necessity, and a lack of interest. We were in a literature and theater, not a history course; time and money constraints made strict historical accuracy impracticable; the eccentricity of original practices was found distasteful; and the commonly perceived political and cultural problems of the medieval period were off-putting.

This decision did not, however, rule out our ability to reflect the Middle Ages accurately in other, less superficial ways: through the play’s philosophical messages, the attitude of its performance, and our approach to its staging, all of which contribute to the ‘feel’ of the play. We aimed to capture the medieval mind and spirit and to recreate the ways medieval audiences would have understood the play’s themes and staging. We therefore had to ask ourselves: “What themes of the play reflect the medieval mind, and what are the distinctly ‘medieval’ qualities of dramatic staging?”

The first and most obvious theme is religion. Though the play of the Antichrist is not a liturgical drama, it is still deeply involved in religion: it was part of the celebration of the religious feast of Corpus Christi, performed by lay guilds and their members. Rather than enrich Latin religious ceremony, this play was “[v]ernacular, didactic and emotive drama written for the laity” (4). Our decision to translate most of the script into modern English vernacular was made much in the same spirit. Though our production did have didactic and emotive elements, it did not have them in the same manner as the original. Our production, it can be argued, served more as a parody of medieval Catholicism than as something meant to teach the audience how to be and feel Catholic in earnest. 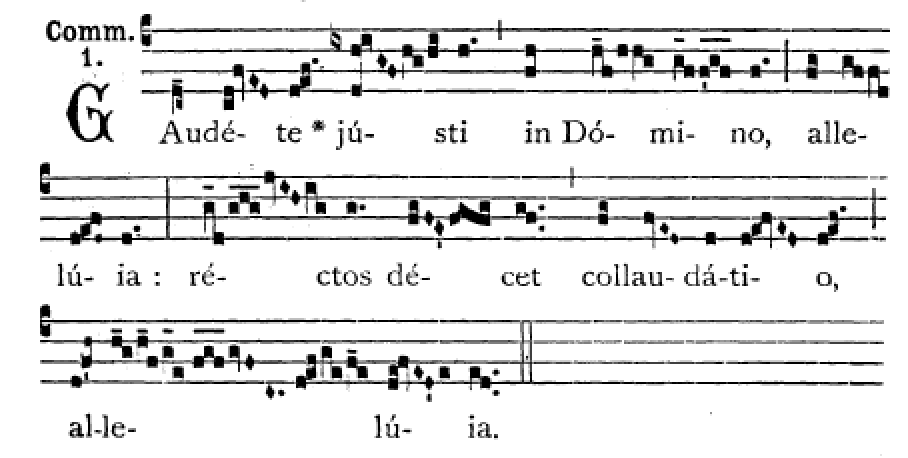 Neumatic notation from the Liber Usualis (1961)
for the Communion antiphon Gaudete justi.

One of the clearest examples of this comes in a change in music and message at the end of the play. The original play ends with the Enoch and Elias being led by Michael to Heaven while the responsory “Gaudete justi in domino” (Let the just rejoice in the Lord) is sung, but our production ended with the demons telling the audience that they’ll be going to Hell, followed by a musical number about how everyone will go to Hell. While amusing for everyone, this choice dramatically changes the tone and message of the medieval play. The original ends in salvation and hope, ours ends in damnation (albeit a cheerful damnation). In this sense, we can argue that our production pokes fun at a more modern, Calvinist-inspired view of an unforgiving Christianity, as opposed to the more lenient attitudes of a medieval Christianity that allowed for forgiveness from sin through confession and absolution. Alongside our amusing and contemporary reference-strewn script, changes like these tended more towards a parody of Christianity as a whole than a representation of medieval Christianity on its own terms, which likely would not have been nearly as entertaining for a modern secular audience. Though the play’s basic storyline and religious identity remained intact, its original themes did not.

A number of differences impacted our ability to stage our play of the Antichrist in the way medieval dramas, particularly biblical dramas, were staged in their own time and place. The first difference is that of audience: the medieval spectators of the Antichrist were presumably attending the Corpus Christi feast and encompassed a wide portion of the community. Though our performance attracted a larger crowd than expected, it was primarily an academic crowd and nowhere as comprehensive as the medieval audience. Our choice of playing space also affected the performance’s medieval staging. In Chester, the play would have been quite mobile on a pageant wagon, moving from station to station through a onlooking crowd. Our performance was confined to one spot with a sitting audience, a justifiable choice since we were only performing one play from the cycle.

Still, a number of features mirrored those of medieval staging closely. The interactive proximity of audience and actors carried over from the medieval world. Our use of music during the play also was a common thread: this was common practice in medieval drama, which often saw performers accompanied by musicians before, during, and after the play. Our supportive and cheering audience indulged in some of the disorder and drunkenness that belonged to medieval festivity; our actors did too, quite in the medieval spirit. That said, the far more conservative nature of a twenty-first century theater audience was still visible in their orderly seating and general good behavior, though should be attributed to differences in culture and the constraints of the modern university rather than a fault of the production.

The strongest tie to the medieval in our performance was its cooperative and semi-professional nature. In the Middle Ages, these plays would have been performed by guild members: tradesmen, not professional actors. Nevertheless, the medieval performers would have had some knowledge and competence in what they were doing because of its deep-rooted tradition. Likewise, many of our actors had some knowledge of drama and performance, but none were yet professional actors. The cooperative creation of the play also felt similar to the cooperative spirit of the guilds: everyone contributed something to the creation of the performance. Some people provided or created props, some oversaw makeup and costuming, while others wrote the play. We all had different roles based on the skills we brought to the performance, as the guilds would likely have done.

Despite the many modernisms, the changes to original themes and staging, and the loss of a superficially medieval appearance, our play still managed to capture a fair amount of the medieval spirit. Our performance had actors running around in a semi-professional manner, shouting about the Antichrist, devils, sorcery, and the undead—it felt medieval, even to someone who knows nothing about the Middle Ages, a feeling made all the more palpable because the play happened in an environment as thoroughly engrossed with modern social relevance as academia.