Theatre is created to be shown, shared, and experienced by others—a performance is nothing without its audience. This partnership between performers and viewers perched at the cusp of the theatrical experience is fragile, unpredictable, and socially complex. In our performance of the Chester Antichrist, we tried to replicate as closely as possible the experience of being a medieval audience member. We brought our audience outdoors, wove them into the story, invited them to bring a bottle of wine, unsure of how our audience would react. Yet these people sat on the damp grass on a chilly April afternoon, stayed with us every step of the way, and reacted to every joke and plot point almost the exact way we’d hoped. It’s possible that the positive response we received was thanks to a group of particularly open-minded and generous audience members, but it was also likely due to the environment we created, closely modeled on the environments of medieval drama.

“We had convinced a random assembly of people to cheer for an angel of God, unprompted.”

A few moments of audience engagement stand out. Early in the performance, we played a game with the audience in which we asked them to vote on the Kings’ sacrifice to the Antichrist. Voting by applause, they had to choose between a goat figurine, a fake baby, and an audience member who had been pulled from her seat. As we had hoped, they overwhelmingly chose to sacrifice the human volunteer. This otherwise inappropriate enthusiasm attested to their engagement in the spirit of participation and the dark comedy that pervaded the play. Later in the play, they not only laughed along with us, they cheered. The audience unexpectedly applauded when the Archangel Michael arrived to slay the Antichrist. The only line she spoke in a powerful, booming voice before the audience erupted in cheers was, “Antechriste, nowe ys common this daye” (l.625). They knew immediately what was about to happen: God’s wrath against the Antichrist had arrived. We had convinced a random assembly of people to cheer for an angel of God, unprompted. 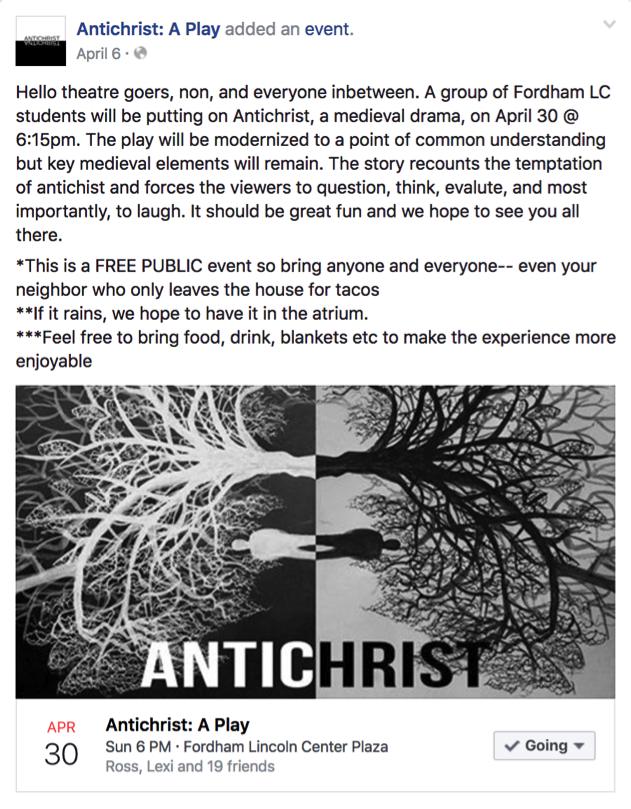 We did not achieve this response through deep immersion in a convincing theatrical experience. Rather, our play entirely discarded the “fourth wall.” Instead of trying to convince the crowd that we were a group of honest-to-God angels and demons, we invited them to engage in the façade through a highly self-conscious style of performing. We constructed a relationship with them by involving them directly in the action. Getting to this point took some preparation. We advertised the performance so that people knew it would be dark, weird, and irreverently fun. By inviting them to bring blankets, food, and drinks, we communicated that this was a casual event, no ties or tickets required. We had nothing resembling a sound system, so once our audience had assembled, Professor Albin asked them all to scoot forward on the grass, inviting them to “make some new friends!” By inviting them to move physically closer, we asked for their cooperation and engagement. They knew could not be passive observers.

Our performance engaged the audience by acknowledging them, making off-the-cuff jokes that could only exist in the moment. As he struggled to untie the knot keeping our tree in place, Antichrist’s Body, played by Patrick Caldwell, called out to Prof. Albin’s parents, “You raised a real Boy Scout here, huh!” Encapsulated in that comment was a complete disregard for the illusion of character or setting. Patrick became himself, addressing real audience members, but was still engaged in the action of the scene—and, because it was so unexpected and irreverent, it got a huge (if somewhat surprised) laugh from the crowd.

Later in the play, during in one of the audience participation games, Antichrist (Patrick) called out to Peter, who had not yet stepped on stage as Helias, to tell the audience what they were playing for. In an unscripted moment, Peter called out, “They’re playing for the faculty’s healthcare!” and Secundus Rex (Lexi) called out in turn, “It’s not a joke!” This exchange alluded to tensions between the Fordham faculty and administration over a drastic reduction of healthcare benefits that unfolded in the Spring 2017 semester. The unique combination of current events at Fordham and the thin line separating fiction from reality in the play again earned a (slightly more bewildered, but appreciative) laugh from our audience. The audience’s expectation of immersion, conditioned by the countless movies and other media that we consume, was completely denied: our “backstage” was the sidewalk, our props were hidden in plain sight, and our costumes barely concealed street clothes. The result was an exciting theater-going experience that showed off all the gears and reached the audience in unexpected ways.

To talk further about the performance’s social dynamics, it’s worth noting there were a wide variety of people at the performance. Young, old, Fordham-affiliated and not, a crowd of about 60 people sat together to become one mass, one community. The space of our performance—the courtyard plaza, a familiar space nestled between FCLC’s three main buildings—and the composition of our audience made our Antichrist a particularly interesting social experiment. Much like the diverse group that attended our performance, which included family, faculty, theatre students, friends, and passers-by, medieval audiences shared complex relationships within the social structures that determined who they were to each other. As Claire Sponsler explains in “Culture of the Spectator,” audience members can attend a performance for varyingly different reasons, depending on their location in the culture. This surely was the case with our audience, too. 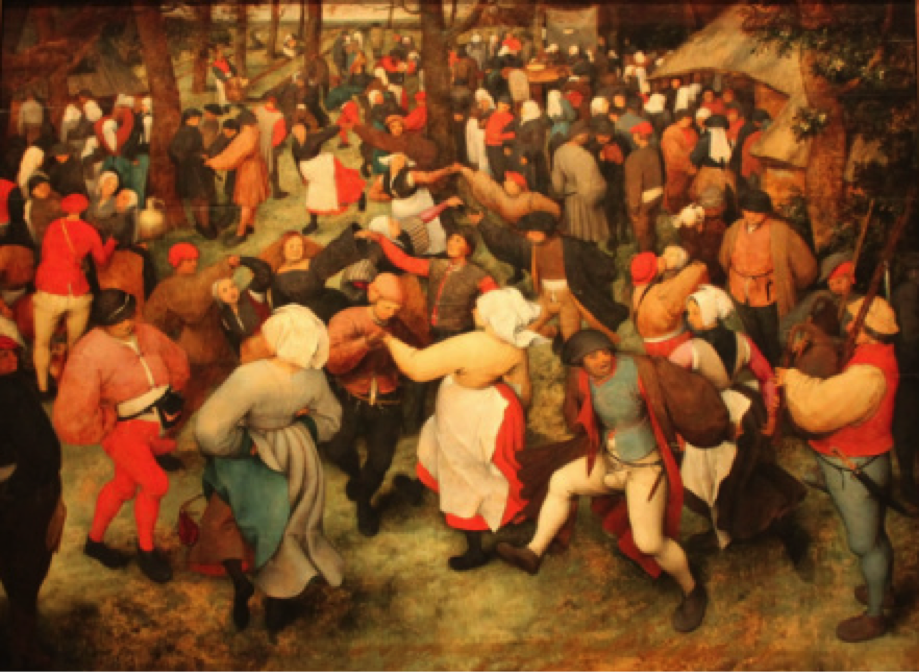 Still, some form of group mentality must also have had a hand in our audience’s enthusiasm. As Sponsler writes, “an audience for any public performance is always a collective that shapes in part the reaction of its individual members” (22). When we consume media individually, our responses to that media are, at least at first, completely internal. However, as audience members, we respond to stimulus alongside everyone else in the crowd, in real time. If one audience member was, at any moment, unsure of how to react to what we were doing as actors, the response of everyone around them would have contributed to how they felt about it. In a circular relationship of indistinguishable origin, the individuals who comprise the whole are influenced by the whole. For example, in speaking with one of the audience members after the performance, the first thing I heard was, “That was the most fun I’ve had at a theatre performance in a while!” After deeper conversation, though, I learned that the audience member disliked the comedic style of one of the characters. Curiously, in spite of his uncertainty, this person did not hesitate to label the general experience with clear enthusiasm. The collective enthusiasm of the audience buffered his individual predilections, offering him a different experience than he would have had on his own.

Claire Sponsler. “The Culture of the Spectator: Conformity and Resistance to Medieval Performances.” Theatre Journal 44.1 (Mar 1992): 15-29.