“Speaking with Tongues of Fire”: Finding Power through the Voice in Medieval Performance

I’m generally not a talkative individual, so finding out on the first day of Medieval English Drama in Performance that a whopping thirty percent of my grade would depend on my speaking in class made me nervous. Finding out that I’d also have to act in a play that real, live people would watch made me straight away think, “I should drop this course.” Looking around the room I saw well-read English majors, terrifyingly extroverted theater majors, and my friend Tim. With only one familiar face in the room I felt out of place and uncomfortable. Still, something compelled me to stay.

Required Materials, from the THEA/ENGL 4148 syllabus

If the thought of having to perform put a weird feeling in my stomach, why did I also feel like staying in the class? I thought about it a little more after our first meeting. Prof. Albin had seemed so excited about the subject as he led us through an association exercise, where we called out phrases, ideas, and images that came to mind when heading the words “medieval,” “drama,” and “performance.” I could tell from this exercise that he knew and cared a lot about the subject, as he was already trying to unpack some of the dense meanings of medieval theater for us on day one, so I figured I could learn a decent amount from him. I thought about how I did some musical theater in high school, how even though I was always just a part of the ensemble, I did perform. I thought about how I’ve taken lessons and played in small piano recitals at my local music school for ten years, and how even though I always dread playing for a crowd I go up and perform anyway, just to find out after it’s over that performing is never as life-threatening as it may seem. Hesitant yet intrigued by my professor’s passion, I decided I would stay in the class, thinking to myself, “I don’t care for medieval drama at ALL, but if I can make it to the end I’ll probably learn something.”

Fast forward three months: back from spring break, my classmates and I chose the play on the coming of the Antichrist from the Chester pageant cycle to perform, chose which production groups we wanted to be on, and chose… me to share the role of Antichrist. I was shocked because I was pretty sure I had maintained a quiet reputation since the start of the semester, but somehow I had gotten more than zero votes to play a big part. After wondering why in the world any of my classmates thought I’d be a good fit to play the Antichrist character—did I really strike them as an evil, pompous figure? did they somehow mistake me for one of those theater majors?—I wondered what this would mean for our production.

Meg Twycross notes that women probably didn’t act as much as men in the Middle Ages because of the problem of “insufficient voice” in open-air theatre (33). In medieval pageant wagon performances, the voices of actors could bounce off the walls of the wagons, but acoustics were more problematic in place-and-scaffold plays, as actors’ voices could fade more quickly in open space. I found myself concerned with a similar problem: would the outdoor setting render my already-quiet voice insufficient? In an open-air plaza in the heart of New York City, our production was bound to have to compete with the sounds of ambulance sirens, honking cars, gusts of wind, and more, meaning I’d have to talk loudly.

Not only did the volume and quality of my voice worry me, but also the prospect of using my voice at all. My previous acting credits from high school included ensemble, ensemble, and ensemble. I’d acted in a few shows from the comfort of the background, savoring my ability to sing while keeping my individual voice safe from being heard in a chorus of other voices. I knew I wouldn’t have anywhere to hide in the kind of performance we were preparing for, and I was scared to have to both perform and speak in front of an audience. Every time I raised my hand in class my heart rate would speed up because I knew speaking meant everybody would turn to look at and listen to me. Hell, even simply thinking about raising my hand in class made my heart palpitate. If I couldn’t comfortably perform as a student in the classroom, how could I perform as the main character in our production?

I was skeptical about my ability to have fun and succeed in our performance, but in the weeks leading up to the show I explored performing medieval drama through study and dialogue. In order to put ourselves in the performance mindset, at the beginning one of our first outdoor rehearsals our entire class participated in vocal warmups that required us to experiment with projecting our voices. As we stepped further and further away, we needed to send our voice to our partner across a longer distance. These vocal exercises showed us how much work getting our voices heard could take. Though I still had some concerns, after hearing my voice project thirty feet over the hubbub of the warmups, I started feeling slightly better. 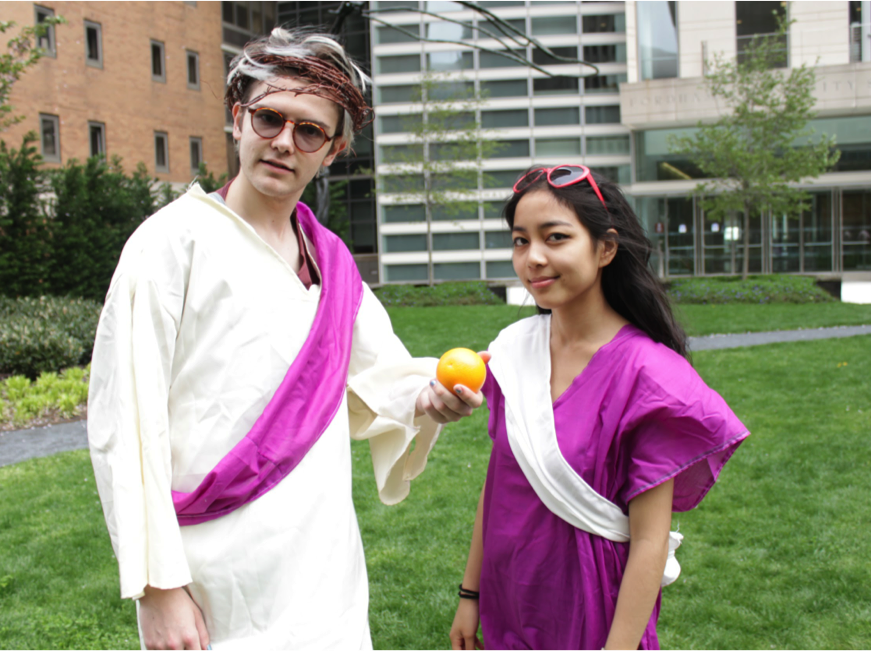 Twycross also mentions that actors in pageant wagon performances may have used the street as extra playing space, but performing at the same level as the audience was often accompanied by audibility problems (37). On the day of our production, Fordham Lincoln Center’s outdoor plaza would become both our playing space and seating area for our audience. Unlike pageant wagon performances, we would not be performing at audience head height, so we would have to come up with a way to alleviate the audibility problems that come with performing outdoors at audience level. Later in the same rehearsal where we warmed up with vocal exercises, I found out I’d be able to use a megaphone for parts of the show. Knowing I could use the megaphone as a prop allowed me to worry less about being heard by the audience and focus more on being present and performing in the play, speaking the lines I remembered and making up the ones I didn’t. In choosing to use megaphones for parts of the show such as the Antichrist’s self-absorbed opening speech or the heated insult war between the real prophets and the Antichrist, our class came up with a creative solution to the potential audibility problem. After a few more rehearsals, I found myself freer to have more fun and embrace the moments of play in our performance as I ran around trying to be loud with my classmates.

Remarking on the physical work and vocal stamina required of the actors in medieval pageants, Twycross observes that “one realizes why such phenomenal sums were spent on beer” (32). In the spirit of medieval theater, my classmates and I also chose to imbibe in the hour before the start of our performance. Minutes before our show was supposed to begin, feeling somewhat freed of my inhibitions, I walked out onto the plaza with my classmates with a smile on my face, feeling excitement rather than nervousness.

In the moments before the start of our performance, I thought of the way each rehearsal of the show we had done had been unique, as we never performed the same insult game twice, never stepped nor stood in the same exact spots, and never said all our lines with the same exact inflections as we had done before. I also remembered that professional actors did not exist in the Middle Ages, and so if the audience found my acting to be amateurish or painful to watch, it was probably for the better, as it was a kind of nod to the medieval craftsman whose side hustle was acting in mystery plays. I had known these facts about medieval performance already, but had never accepted the fact that I could put on what others might call a bad performance and make mistakes in front of an audience, and have everything be fine. The thought that this was the last time I’d be running around screaming with my peers compelled me to come to terms with those facets of medieval drama that embraced the boozy imperfection of the game.

The goal of medieval theater was to communicate history, to say “this is what happened” (Twycross 35). In our production of Antichrist, my classmates and I told a story of deceit and reprisal. Still: putting on an elaborate show after weeks of researching, planning, and rehearsing with the sole purpose of telling such a simple story as ours might seem careless. Why go through all that trouble and not leave the audience with a burning need to change a world in which deceit abounds?
The reason we engage with medieval theater might not seem apparent at first. For myself, I can sincerely say I care about medieval drama because of what it has taught me. Our production forced me to seek creative solutions to challenges I faced, whether by practicing being loud with my peers, shouting into a megaphone, or discreetly taking swigs from a flask backstage. Laughing with my classmates as we fumbled with megaphones in hand and botched our lines in rehearsals and in the real performance alike has allowed me to embrace rather than criticize imperfection, and has, more importantly, brought me sixteen new friends I can comfortably trust and be myself around (seventeen including Prof. Albin). In a turn of events more unexpected than the growing and multiplying of fruit from the upturned tree in our play, I have become excited by medieval drama and the new perspectives it has opened for me. In preparing for and performing in our production of Antichrist, I learned that even the quietest voices can become powerful as they help put stories into the world and say, “this is what happened.”