The action of creation is always a complicated, demanding, political endeavor. The choice to perform something instead of nothing already takes a political position. Plays simultaneously push at the boundaries of establishments and unite communities over commonly shared ideals; actors connect an audience to the story they tell and to the others around them. Medieval theater was no different in this regard: it aimed to question and unite communities through interpretations of well-known, often biblical, narratives. Performing the Chester Antichrist for a modern audience united only by the space they’ve assembled in is likewise a complicated, demanding, political endeavor, one that is especially meaningful to the performers onstage. In fact, the process of creating a modern adaptation of a medieval work is itself a strikingly medieval act.

Much in the manner of devised theatre, our production was created by a group of performers in tandem through a process of rehearsal that encouraged many different ideas and suggestions. No one person made all the decisions. This creative process mirrored the practices traveling troupes of actors followed at the time the Chester Antichrist was originally written. One might accuse our 2017 production of not being entirely devised, since the script was adapted from a preexisting medieval text. However, our collaboration reached beyond the staging of the performance to also encompass the script. Our writers treated the voice of the Middle English playtext as another collaborator, working to color its structure and language to create a new script. The devised nature of our production also appeared in performance. The actors were allowed to improvise and go off script, so long as the story stayed intact. In this way, our Antichrist was devised in its creation and action alike.

Another important collaborator in our production was the audience. The presence of the audience was what allowed the actors themselves to play, taking in audience stimulus and channeling it into a performance meant for those present. During the first scene, for example, Antichrist/Patrick runs a Latin Game with the audience. The concept had worked in theory during rehearsal but we had never tried it out on audience members before the actual performance. In this way, the actors had never fully realized this scene until the moment of performance.

“In this way, Peter performed an entirely medieval act, connecting the common problems of his time to the form of a story that, in that one moment, created a community.”

When this moment arose, the actors skillfully relaxed into it and produced a game filled with glee and active audience participation. Patrick then complimented or heckled audience members for their answers in total disregard of a fourth wall. Eventually, he threw the attention to Peter, asking: “What are they playing for Pete?” This line was never formally written into the script but emerged through improvisation during rehearsal. Peter then offered a response from the back of the audience that came from the audience at hand: “They’re playing for the faculty’s health care!” In classic medieval form, the audience was completely visible to and available for the actors to play off of. In this way, the audience became a part of the performance, and actors could aim their lines at those they saw present in the space.

The audience drew from a variety of different communities. There were scholars and family members, a smattering of theatre majors, friends of the cast, and Fordham professors from other classes. The only thing all these people had in common was their connection to the performers, and through the performers, to Fordham. When Peter improvised his response, then, he actually connected a group of people through a topical issue that almost everyone would have had some connection to individually. This act brought together a diverse group and earned an eruption of applause, laughter, and affirming nods. In this way, Peter performed an entirely medieval act, connecting the common problems of his time to the form of a story that, in that one moment, created a community. 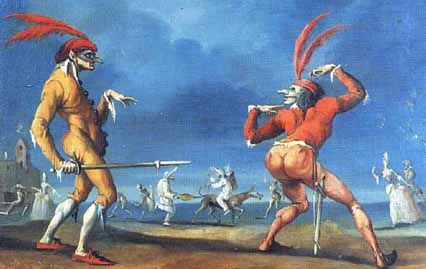 This style of performance is prevalent in many premodern forms of theatre, none more so than Commedia Dell’Arte. This Italian dramatic form has existed since the sixteenth century and is clearly influenced by the medieval plays that preceded it. It is a popular form of theatre still in practice today that involves an invasive form of audience participation during its creation. Troupes of Commedia actors would enter the towns where they were about to perform and inquire about the latest gossip. The performance would then be improvised in “lazzi” or sketches, using masked stock characters to reflect the gossip of the town. These troupes traveled in wagons and avoided scrutiny from audience members by immediately packing up and leaving after they performed. These characters still exist in Italian culture today and have sparked other important types of performance.

This style of performance has been so long-lived because the characters are archetypal and can easily be performed for any audience. Peter’s moment of improvisation stands out to me because it accomplishes exactly what Commedia strives for. He used a piece of common knowledge within the community to knit together an audience through humor. I would argue that after this moment in the first scene the audience became much more connected to the story we told, through a technique that carries thousands of years of tradition behind it.