Why We Need an Antichrist: Disruption through Original Reproduction

“There is always a re-. However, this re- raises questions about authenticity, so that we can ask, ‘is any act original or authentic?’”

When we think about performances we think about the act: the concrete, the thing happening in front of our eyes, or ears, or noses. Yet, the performance takes shape past the now and extends into the future. As Diana Taylor writes in her book Performance, a performance consists of “doing, done, and redoing” (13). Doing refers to the act itself, where a watching audience partakes in the performed movement of actors. Done refers to the finished performance, marker of an end: a product. Done also allows us to revisit the performance, through a video, a memory, or another kind of record. Redoing refers to a “constant state of again-ness” (26): doing things again, looking at them differently, taking art and remaking it. There is always a re-. However, this re- raises questions about authenticity, so that we can ask, “is any act original or authentic?” (26). We might also ask, is redoing about making a different performance or about staying true to the original performance that’s being redone?

Our production of the Chester Antichrist tackles this very question about redoing, indicating how essential it is for performance to maintain meaning and cultural relevance through a commitment to performance in the first place. The multiple ways our class changed and reimagined the medieval play allowed an entirely new production to emerge. Our completely new adaptation of the play into modern language created a new performance. The characters spoke in modern English and swore frequently, while the original Middle English playtext features an Antichrist who professes his power in a more refined manner. This choice to modernize, which changed entire scenes on the page that went even further in performance, challenged both the rooted playtext and our freedom to adapt. Our first draft of the playtext was a free-for-all; Professor Albin then stated that we needed to retain all that the original text said, if not word for word. The challenge of staying true to the original text but also reworking its language presented hurdles over how much we would mirror the medieval world.

“[E]ven replicating an original performance through ‘painstaking research’ ends up creating ‘a new kind of original’—in other words, an original reproduction.”

These hurdles became easier to leap after we had a stable understanding of how the play would approach the issues raised by modernization. We had an original text we needed to follow. Once we began work on the actual performance, the ‘doing’, we had a greater deal of freedom, because we had no original to look back to. We had an understanding of medieval staging and access to a limited set and props, but how the play would be performed was a grey area. We no longer had an original to emulate or even manipulate. And yet, the performance had to be a redoing of something once originally done. Was our play unoriginal, then, in its making, its dialogue, its movement? We made a number of novel choices for the play: Antichrist’s soul and body were two separate entities, characters used megaphones, smoked cigarettes, shot off fire guns, blessed a hamburger bun for a eucharist. Among countless other minute details, this made the play what I would call an original reproduction. Farah Karim-Cooper, Head of Higher Education and Research for London’s Globe Theater, writes that the aim of an original practices production is “to recreate or replicate as many performance practices of Shakespeare’s company who occupied the original Globe” (“Introduction”). While historically interesting, this approach can often limit a performance into a small range of possibilities. Karim-Cooper points out, though, that even replicating an original performance through “painstaking research” ends up creating “a new kind of original”—in other words, an original reproduction. The redoing of performance that Taylor writes about contributes to the creation a new original.

Our original reproduction opened up access to the medieval world for the audience we presented our play to. The story we presented and the way we crafted our dramatic world harkened back to the Middle Ages, but the way we incorporated modern day tools, language, and culture gave rise to something entirely new. It was a redoing of a medieval performance that made that performance still essential to our society. By performing the Chester Antichrist in a new way, we gave rise to a new understanding of the world of medieval drama and that drama’s capabilities. The audience laughed at jokes about Antichrist being the messiah, we referenced modern day issues, including the local collegiate issue of faculty health care, and our audience even cheered when Michael called out for Antichrist to be slain both body and soul. 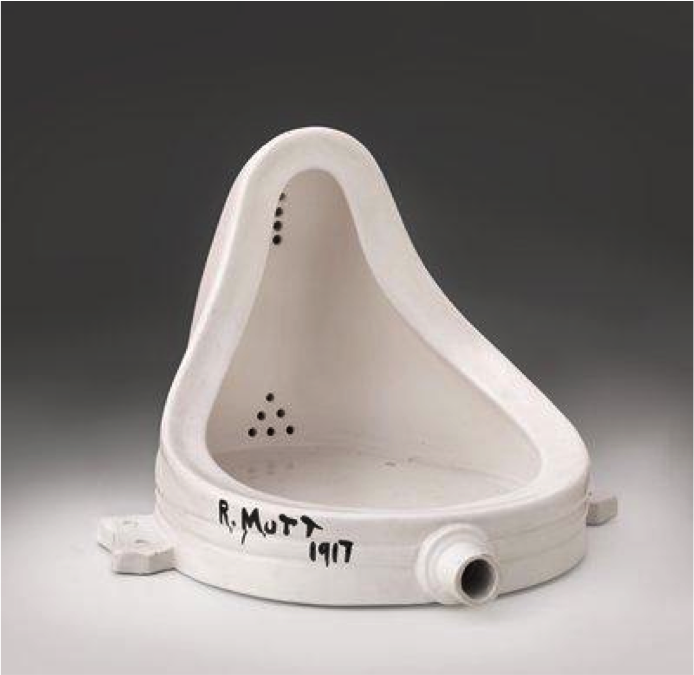 Marcel Duchamp’s Fountain (1917), a well-known instance of defamiliarization: once placed in a museum and given a new title, the perception of the common urinal changes dramatically.

These new elements, this reproduction done in a new, almost but not quite inauthentic way, created a world the audience could interact with and derive new meaning from. The play achieved this through a disruption of the familiar, which Viktor Shklovsky claims in his essay “Art as Technique” is the purpose of art: to rupture a certain comfortable view of the world. This theory is crucial to modern art, from Brecht’s epic theater to Dadaism. In our case, we disrupted the medieval, and even prior knowledge about religious plays, for our modern audience. They were presented a with a familiar dramatic form treating a character they already knew about, the Antichrist, but the characters and actions were unfamiliar enough that they had to look at the play in a new way. The Middle Ages could no longer be perceived as a backwards world of smelly, daft peasants, but rather as populated by people with a complex understanding of morals, religion, and agency. Similarly, where a religious play is often thought of as stiff, preachy, and long, in our hands it became a game filled with jokes, real stakes, and manipulations. Our play created a disconnect with the familiar, and the audience was awakened to a new perspective.

Our audience was able to connect to the play, to what our Antichrist wanted to achieve, because of the rupturing effect of what they perceived. If we had chosen not to adapt the play for a modern audience and instead maintained the historical principles, a rupture would not have been possible because of the lack of connection. At the same time, our performance ruptured the actor’s own perception of performance. By redoing something that seemed antiquated, by breathing new life into a religious play, the actors were able to rupture their own notions of what medieval drama looked like. Thus, both audience and actors were able to take new meanings from the play through a new form of audience interaction, through the freedom to mess up on stage, through having the audience become a part of the show without imposing walls or breaking them. These kinds of rupture are why redoing is so important. As Karim-Cooper notices about the Globe’s original practices performances, some of the greatest insight came when the traditional all-male cast was changed to all-female. A new understanding of character, gender roles, and homosociality emerged because of the change. Similarly, in our Antichrist, adapting the part of Antichrist into two characters, soul and body, and inviting audience interaction during the Sacrifice Game allowed the audience to reconsider how the body and soul duality operates or what a sacrifice really is.

Our performance was not only a redoing, it also produced ‎a new done: a film. Once a performance was over in the Middle Ages, the only records that remained were perhaps the track marks of pageant wagons, a stain on a wall, or human memories. Our film enables our done to expand through time, at the same time that it also alters the performance altogether. In a sense, the film ends up being one more performance, an original reproduction of an original reproduction. The film is a new production made out of the play, because it is edited from a series of shots, offers a fixed point of view, begins with an introduction that sets a different tone, lacks an audience at times, and shapes how the play will be seen. Simultaneously, the film acts as a permanent residue of the show; there will always be an opportunity to witness the performance, or rather, to witness a new reproduction of the performance. Choosing to make a film is explicitly choosing to perform and create a new performance, one that does not correspond to the original performance. This new residue and new performance not only allow a new audience to witness the performance, but also invite new disruptions that arise from the filming and editing process.

Performance is about contradictions: “it makes visible, and invisible; it clarifies and obscures; it’s ephemeral and lasting; put-on, yet truer than life itself” (Taylor 41). Each contradiction makes space for something new, not only for the audience but for the performer, too. Authenticity in recreating a historical performance can never truly be achieved. The best we can hope for is an original reproduction. Our production of the Chester Antichrist succeeded in presenting something new, both by making medieval drama visible through live performance, and by making choices in creating the film. It was ephemeral in the live performance but will last through the film and memory. It put on a reproduction, making a reality and telling a truth that might not otherwise be expressed. In live performance and in film, our performance of Antichrist did not recreate the Middle Ages or bind itself to authenticity but instead achieved a rupture, through the process of redoing an original performance and creating an original reproduction.