Preservation and Adaptation in Antichrist 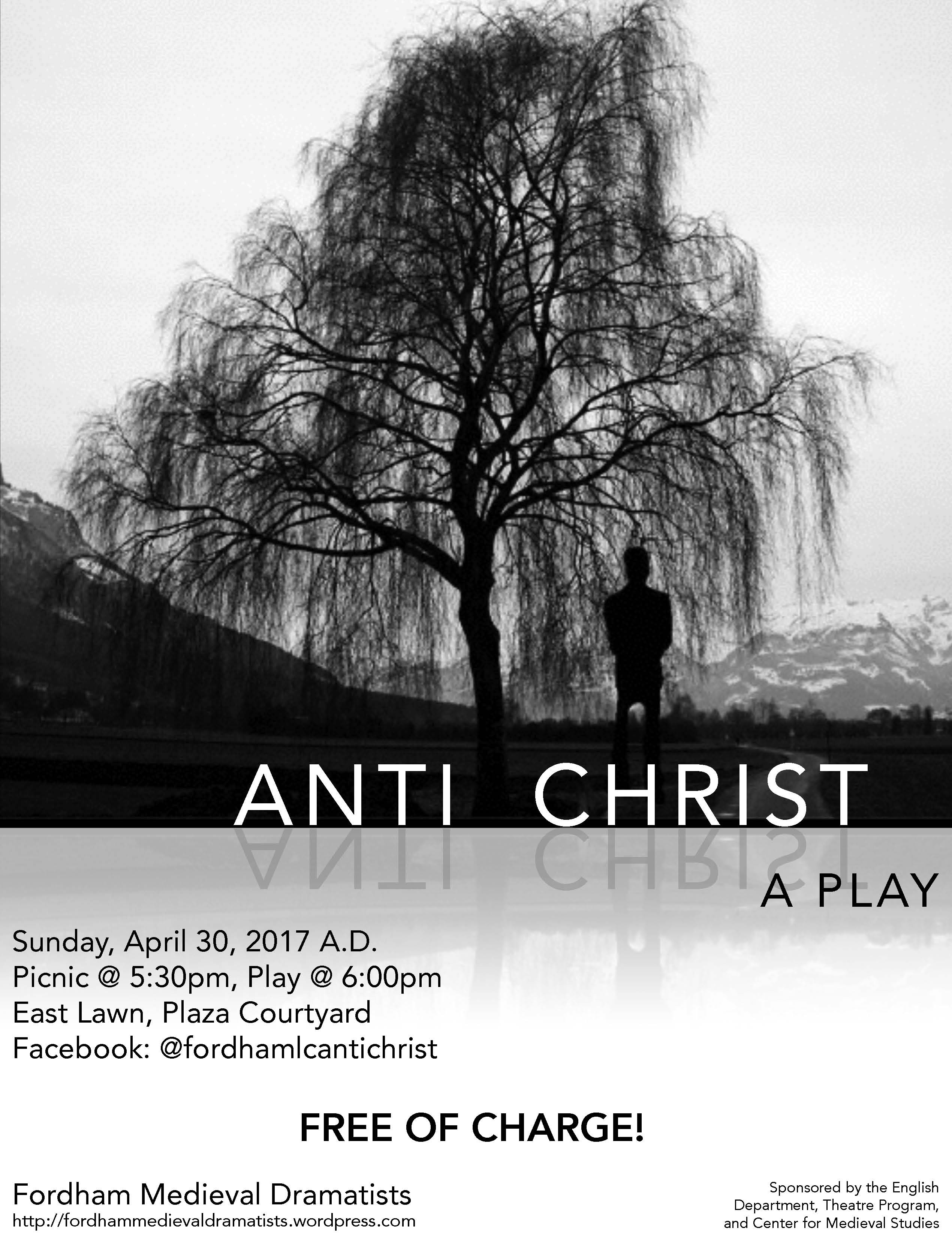 Poster for FMD’s performance of the Chester Antichrist.

Shortly after our performance of Antichrist, a friend approached me and asked, “Was that how the play was supposed to come out?” His response didn’t surprise me, considering the contrast between the somewhat misleadingly ominous tone of our media campaign and the humorous and interactive nature of our performance. However, I think this response also stemmed from the expectations this friend brought to the notion of medieval or historic performance. When I signed up for this class, I had my own expectations about medieval theatre. I did not expect the propensity for crude and witty humor, or the actors’ self-awareness and interaction with their audience. The fact that our performance was so surprising to some of its viewers suggests that it was successful in deviating from contemporary expectations of dramatic productions and embracing a medieval approach instead.

Our audience may have suspected that we’d completely transformed the play from its original script, due to the simplicity and satirical tone of our production, but these elements were important parts of its resemblance to medieval theatre. Our contemporary rewriting preserved much of the original script’s meaning, adapting the Middle English content to make it more understandable for our audience. Although sweeping declarations like “Jesus was a fraud” and “I am the Messiah” may seem like our attempt to poke fun at biblical content, these statements are lifted from the original playtext itself. Moments where actors are self-aware and narrate their character’s situation—when Primus Mortus exclaims, “I was dead but nowe live I” (l.106), for instance—may seem humorous and unexpected to a contemporary audience, but they are entirely conventional in medieval playtexts.

Though our performance was modified from its original Middle English, we preserved the story of the Chester Antichrist and several aspects of its original text. For example, we included the play’s opening Latin speech, which both preserved the original playtext and supported a strikingly medieval interaction with our audience. The audiences for medieval English drama were commonly unable to read Latin, and so it is unlikely that they fully understood what what being said when they heard this speech. Our performance captured this aspect of medieval theatre, as our audience was also thoroughly unaware of what was being said during this speech, a point we later reinforced by playing the interactive Latin Game with them. Michael’s dialogue in Middle English was another central piece of the script we were able to preserve, though it served different ends by functioning as a symbol of the purity and goodness of his character.

The self-awareness of our actors was also reminiscent of a genuine medieval production. Research into medieval acting suggest that typical performances were “broad and expressive; and actors presented figures rather than identified with them” (Tydeman 39). In our production, we did not attempt to entirely personify our characters or immerse ourselves in the roles and backstories. Instead, we clearly presented the dialogue while being fully aware of our status as actors in front of an audience. We avoided overly naturalistic interpretations of the characters, acknowledging the overt theatricality of our production. This was reinforced by our emphasis on vocal projection and clarity, amplified by megaphones: the audience’s ability to hear us was more important than how ‘real’ or ‘natural’ our characters appeared. Our actors “did not become but represent[ed] the person [they] play[ed]” (Twycross 32).

Though our final performance was well received and executed, we encountered a variety of challenges during the design and rehearsal process that revolved around a central question: “How can we both adapt and preserve a medieval text in a contemporary production?” We cannot be certain of the processes used in the Middle Ages for rehearsal and staging, nor can we perfectly recapture the relationship between the performers and audience. Even so, we were able to use the information available to us to create an informed interpretation of the play. When we were faced with how to recreate the Antichrist’s false miracles, we considered how an original performance would have approached the problem. Although the use of elaborate special effects was unlikely, there is substantial evidence for the medieval use of pyrotechnics to depict supernatural events (Twycross 38). We therefore included a fire effect in the performance that both nodded to the past and successfully contributed to the visual spectacles. Our solution for the upside-down tree was also simple and productive, considering that the original text has no information on how the effect should be created beyond the dialogue: “Nowe wyl I turne, all through my might, / trees downe, the rootes upright— / that ys marveyle to your sight— / and fruyt groinge upon. / So shall they growe and multiplye / through my might and my maisterye” (ll.81-86). Antichrist briefly mentions how he is able to turn a tree upside down, but does not directly reference whether or not the audience can see the miracle he has performed. He comments on how the tree is a “marvel to your sight,” yet there is no indication that any of the kings are struck by his miracle. We invented a brief and subtle solution.

The playtext also gave us ideas for how to stage the dead coming back to life, an easier effect to accomplish, considering the original script gives lines for the dead that indicate their physical presence on stage. Our choice to position the dead among the audience contributed to the theatrical impact of the play—attendees had to walk around and sit among the actors, blurring the line between them. Another significant choice we made was casting two actors for the role of Antichrist. Besides facilitating the memorization of lines and rehearsal, we used the dual casting to resolve certain problems in the script. For instance, when the Antichrist declares to the kings that he will die and raise himself from the grave, the playtext doesn’t indicate how the actor is supposed to stage his death. The text merely says: “I dye, I dye! Nowe am I dead!” (l.133) before the kings decide to bury the Antichrist. Our two actors were able to choke each other to death, rather than having a single character collapse after announcing their demise. The use of two characters also echoed the notion of duality that works throughout the play—of Christ and the Antichrist, the living and dead, Heaven and Hell.

The outdoor public location of our performance also contributed to its medieval quality, given the evidence that suggests productions in the Middle Ages were often held outdoors on streets and churchyards, even though they were commonly discouraged by church authorities (Tydeman 34). Although we did not run the risk of being censored, we simulated a medieval performance by intruding on a space that is usually otherwise occupied. This intrusive quality was highlighted when a security guard walked through our performance as we were staging it. Though accidental, this event contributed to the notion that we were offering a public performance in the midst of daily life. Our choice to perform at Fordham was also evocative of the fact that medieval plays were often “the centerpiece of a special occasion for a close-knit community” (Twycross 35). By performing in a familiar and open environment in front of friends, classmates, and teachers, we were able to create a communal atmosphere that reflected the community.

The process we used to analyze the original playtext of the Chester Antichrist and to adapt it for a contemporary production resembled medieval processes as closely as it could, considering the obstacles of our limited information and time. Because we based our performance primarily on a close reading of the text, we had to use the resources available to us to fill in the gaps. Our choice of an outdoor location, a self-aware acting style and our simple but effective staging all contributed to the medieval quality of the final performance, while offering an understandable and entertaining event for our audience.