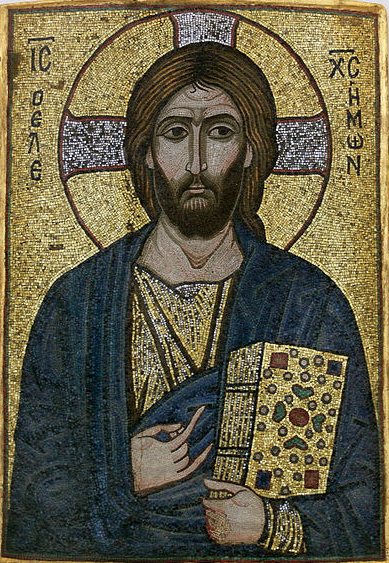 When we read the Latin that opens the Chester Antichrist, how are we meant to envision Antichrist’s appearance? When he walked onto the boards of the pageant wagon, what sort of impact did his semblance have on the audience? Would he have resembled the Gothic portrait of Jesus cemented through so many medieval works of art, or, in accordance with his evil nature, was his costume the antithesis of all things divine?

These questions grew more complicated in our production of the Chester Antichrist. Should a modern production of the play seek historical accuracy, and if it should, how? One approach to outfitting the play of the Antichrist might take a cue from the Campaigner’s Manifesto, a well-known set of guidelines for Civil War re-enactment which includes tenets like, “I obtain the most historically accurate clothing, equipment, and other relevant items available to me. I insist upon the use of proper materials and construction techniques in all reproduction items.” In this light, the costuming of the Chester Antichrist would aim for the highest degree of historical accuracy, with the end goal of recreating the play as it appeared in the Middle Ages.

While it is possible to breathe historical life back into the play of the Antichrist, the lack of detail about medieval dramatic production and the improvisational practices that were common to medieval dramaturgy make accurate recreation much more of a guessing game than an exact science. Instead, our class attempted a modern production of the play. This choice is no less complicated and begs the questions: what should a modern Antichrist look like? How does one create a modern Antichrist without discarding the drama’s distinctly medieval character?

Answers to these questions are difficult to find in the margins of the playtext itself. While there are over 700 lines of dialogue and a handful of stage directions, the author of the Chester Antichrist offers no explicit description of how the characters appeared. In designing costumes for our production, I realized that, while the playtext is not authoritarian in its demands, it does not have nothing to say about how its characters should be costumed. What the playtext lacks in stage direction is more than compensated by content of the play itself—“read with imagination, passages of speech can supply a great deal of information… Comments on speech, gesture, movement, appearance, and so forth await a careful reader” (Tydeman 31). By looking at characters’ speeches and interactions with others (including the audience), the playtext offers a wealth of clues towards how these characters might have looked in the Middle Ages and how they would look in our production.

One obvious clue, for example, appears in the verbal exchange between Antichrist and Enoch/Helias. Antichrist verbally attacks the two prophets: “Eyche man may see you be so / all by your araye, / muffeled in mantelles. Non such I knowe” (ll.388-390). Of particular interest to the costumer is the last line: to be muffled in clothing suggests a certain opulence, a layering of robes that stereotypically belongs to heavenly messengers. Antichrist’s additional quip, “Non such I knowe,” lends credibility to this notion. Why is Antichrist unfamiliar with Enoch and Helias’ robing? Because it belongs to a biblical antiquity that both Antichrist and the audience are removed from. Speaking these lines therefore acknowledges that the play of the Antichrist is not a biblical play, in the temporal sense. When the Chester Antichrist is performed, its actions belong to the same era that the witnessing audience exists in. 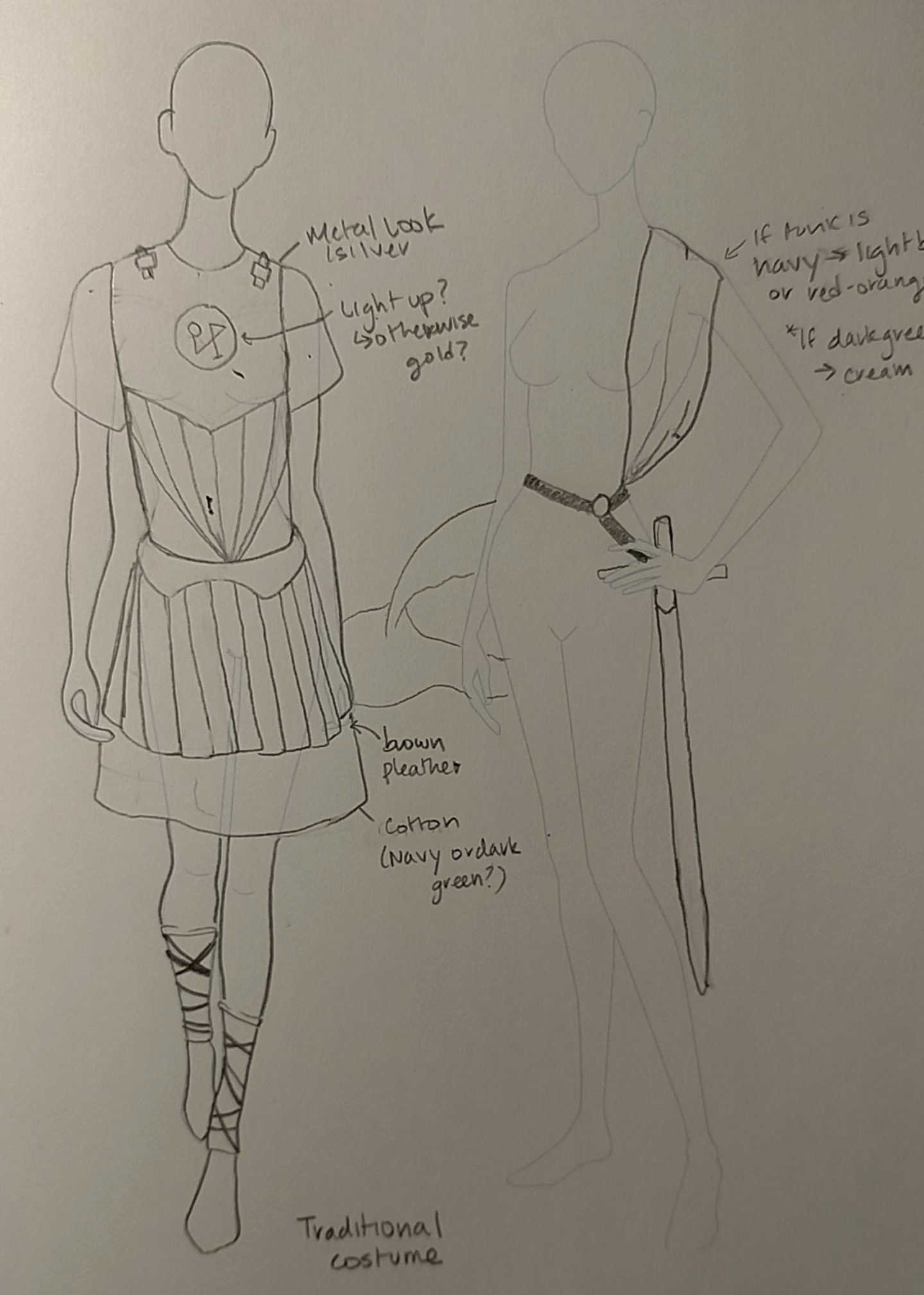 While none of the play’s characters directly indicate what Antichrist is wearing, the playtext offered two points of guidance. Antichrist’s dialogues frequently use Latin, a language that, even in medieval Europe, would have been foreign to all but the most learned observers. While they may not have understood the Latin syllables pouring from Antichrist’s mouth, the devout Christian crowd may have made the connection between Antichrist and the grandiose language they heard in church every Sunday. The object of Antichrist’s Latin monologues is thus not the meaning of his words but the authority they give his persona.

Secondly, the essence of Antichrist’s character is that of a showman who constantly feels the need to justify himself; he parades as the Messiah without any of the substance. When designing the costume for Antichrist, I wanted to reflect this discrepancy between Antichrist’s outer façade and the falsehood beneath it, while also introducing some special effects to add the character’s visual impact. On the “outside,” Antichrist was dressed in garb analogous to what we see in images of Jesus even today: a white floor-length tunic with a sash draped across his body and a crown of thorns on his head. Still, the costume allowed hints of Antichrist’s true nature to bleed through into outwardly holy façade: the sash was of a vibrant purple material, an ostentatious display of royal majesty that contrasts with Jesus’s humility. This robe was also rigged so it could be pulled apart when the Kings turned on Antichrist to reveal his true nature underneath: his almost completely naked body, save a pair of flashy green spandex, was covered with satanic symbols.

Another costuming problem arose in Antichrist’s body-soul divide. The playtext itself does not indicate two distinct characters, but there is a stage direction that notes “Then [the first and second demons] shall take hold of his soul, and later his body” (l.678sd). Our writing team used this direction to split Antichrist into two distinct figures: body and soul. Though each was played by a distinct actor, the two characters are meant to be part of a whole, and this suggested an opportunity for visual representation: we could create visual unity between the two that would convey their connection without the need for explicit verbal cuing.

The characteristic of Antichrist I chose to hone in on in this regard was that of inversion. In the action of the drama, we see multiple instances where Antichrist perverts the order of nature: he flips a tree upside down, raises the dead, and kills the celestial messengers Enoch and Helias. This inversion is mirrored in the color of the robes Antichrist’s soul wears: where Antichrist’s body had a white robe accented by a purple sash, the soul’s robe is purple and fitted with a white sash. The identical costume construction and shared color scheme helped draw the connection between the two without blatantly declaring it to the audience.

Costuming, even when minimally crafted, can have a tremendous impact on the experience of theatre. Before a single actor opens their mouth to speak, the audience already has expectations of their characters and a general idea of what kind of dramatic world they belong to, based on the production’s visual design. It is one thing for a man in casual clothes to sit down and light a cigarette, as our Antichrist did; it is another thing entirely for a man readily readable as Jesus to do so. That is the power of costume: to defy an audience’s expectations and establish extraordinary new ones.