A Truth-telling Jester: Bewteen Antichrist’s Body and the Audience

During our performance of the Chester Antichrist, we were able to get a number of powerful reactions from the audience. Leah’s entrance as Michael the Archangel and the resurrection of the dead were both played in a unique manner. Most striking was when Patrick asked what ‘prize’ the audience was playing for during the Latin Game, and Peter responded with the current Fordham issue of professors’ healthcare. The day after our performance, Patrick and Peter admitted in class that every time they rehearsed this bit, it was always an impromptu moment that Peter improvised. In this sense, this scene struck me as insightful of how the Chester Antichrist could have actually played out in the Middle Ages. The unpredictability of the play’s main character had shined across the ages in a form that modern audiences could understand. 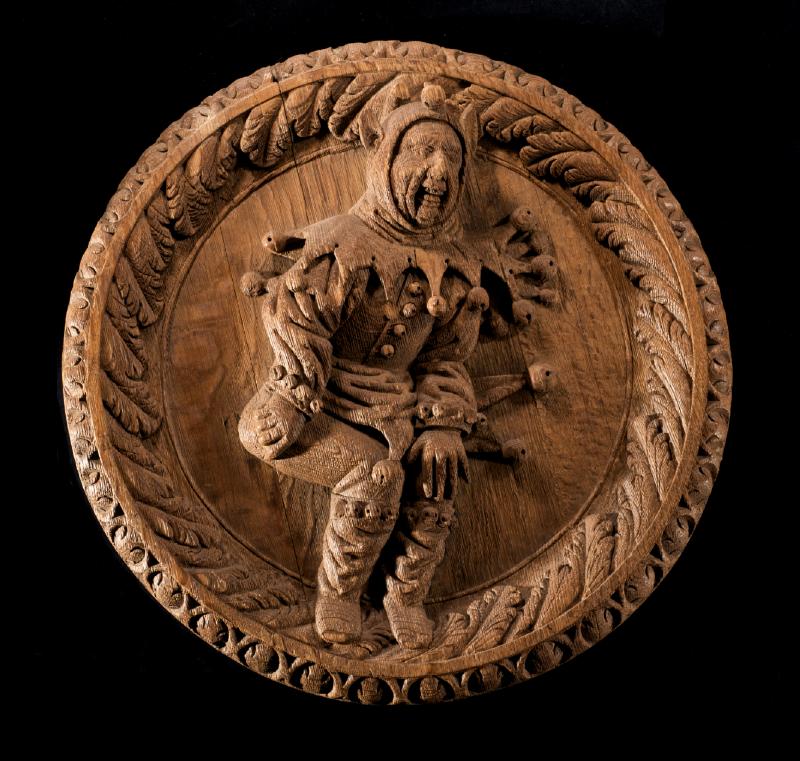 16th-century carved oak roundel of a jester from the King’s Presence Chamber at Stirling Castle, Scotland.

As we prepared the play, I kept coming back to the same question. How could we draw the audience into the play? How could we bring the audience to the same level as the actors and actresses? Much of this burden fell to Patrick’s erratic Antichrist. During the Middle Ages, jesters and clowns would have played a very similar role to that of the Antichrist in our play. Out of all of the roles, Antichrist is flamboyant unlike any other character, all of whom have serious and straightforward goals. The Kings search for a figure to rely on; Elias and Enock are on the path of righteousness and holy crusade; Michael is the righteous path Enock and Elias aspire to; the Devils fill the stage with dread and provide closure. However, the audience would not have linked all these goals together without the play’s keystone, the Antichrist, the jester of our play.

The jester became an important figure for our production, as the character who invites the audience into the play, after their uncomfortable encounter with the Latin at the play’s beginning. Antichrist tosses aside Prof. Albin’s serious tone and warms up the atmosphere, drawing the audience’s attention squarely towards him. Jesters also did this in the Middle Ages as “clever, observant men… used at times as a convenient tool in the hands of politicians” (qtd Peacock 117) Jesters and clowns encouraged a friendly atmosphere at the royal court, putting the people around him at ease. Jesters knew what role they played and what advantages their position provided them.

In our production, it is usually the character of the Antichrist who delivers to the audience the most dangerous lines that could bring them discomfort, but the audience fully accepts his words with a hearty laugh. This reflects the jester’s history: he has always had an important role imparting uncomfortable truth, as when a jester was the only one who dared tell the French King Philippe VI that his army lost (Peacock 117). In this sense, the Antichrist plays the role of the jester for an audience who take the role of kings—in fact, the play’s Kings sit with the audience for a while during the play. Royalty invites the jester to entertain or provide the truth; in our case, the entertainment and the truth were the play itself.

“[A]ssuming the role of a jester… allow[ed Patrick and Peter] to speak the truth that nobody but they would dare say out loud.”

Patrick and Peter’s reference to the matter of faculty health care is the best example of how our jester spoke to a potentially uncomfortable truth. The exchange brought up a sensitive topic for the university, but the reaction wasn’t one of dissatisfaction. By assuming the role of a jester, Patrick had been able to throw his role towards Peter, allowing him to speak the truth that nobody but they would dare say out loud. This introduced an interesting dynamic that gave the audience permission to cheer or react otherwise.

Other aspects of the play helped allow Antichrist to connect with the audience. Our scriptwriters ingeniously decided to divided Antichrist’s role into two, the body and the soul. The body was able to play the role of the jester, while the soul was able to maintain the integrity of the play and the script. Antichrist’s soul, Elana, was able to perform the blessings of fire, for example, without the jester’s mischief interrupting the flow of the performance.

In addition, the actors and actresses self-awareness in the play added to this the effect. When Atticus discussed how his makeup resembled Darth Maul’s with an audience member, when I caressed the goat from the Sacrifice Game while looking at the audience, when Patrick commented how Prof. Albin’s parents really “raised a boy scout” as he untied the knot holding the tree upright, our performance extended its connection with the audience. These outbursts of silliness and self-awareness helped maintain a balance between the essence of the play and the jester’s role.

Ultimately, the presence of a jester in our production of the Chester Antichrist played a significant role in allowing our audience to better understand the play. From the beginning, Antichrist’s Body assumed the role and allowed the audience to join the drama’s journey. The jester was a mediator who allowed the audience and other actors to be on the same level. The jester spoke the truth, no matter how uncomfortable. The fact that Patrick and Peter were talking about Fordham healthcare so seamlessly was only possible because of the role that Patrick assumed. The actors and actresses had a major role, too, as they showcased a defining line between the play and the modern world, while the jester invited the audience into the play. In these ways, our play fully disregarded the fourth wall in ways that created strong outlets for the audience to connect.