Before my freshman year of college, my mother made me create a Facebook account. I was not keen on the idea. I had a Myspace page in middle school, and I was not very excited about putting so much time and energy into letting people know what I do in my spare time, again. However, my mother assured me that I needed a Facebook page in order to help meet people at my new school and learn about events and programs happening around campus. As it turns out, our performance of Everyman was one such event, and Facebook proved crucial for getting the word out. At the time of its creation, around thirty people had been invited to follow the Everyman event page. By April 26th, that number rose to over two hundred. Many of these people had never heard of Everyman before, so the page had to function not only as an invitation to the performance, but also as an introduction to the play. Our Facebook page had to reflect the nature and themes of the performance that it sought to promote.

The first component of the Everyman event page that visitors meet is the cover photo. 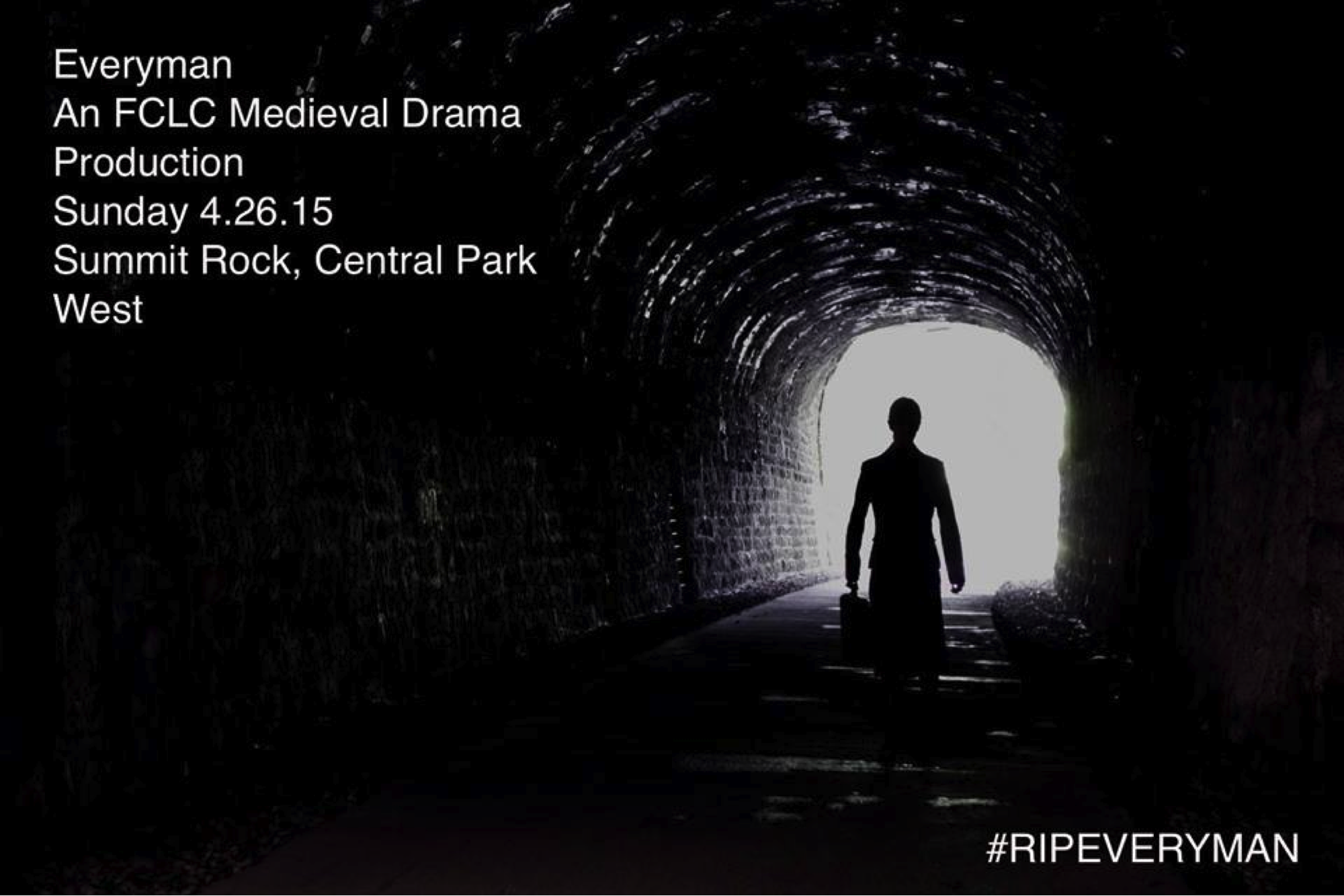 This image depicts an androgynous figure walking down a dark tunnel. It was important that the figure not be gender specific: our Everyman in the performance is played by men and women. The character does not have a specific gender because Everyman represents all of humanity. Additionally, the subject’s face is concealed in the cover image. This parallels the use of masks to partially cover Everyman’s face in our performance. In this image and in the play, faces are hidden because Everyman does not have a singular, fixed identity.

Light and dark contrast sharply in the image, an effect created by underexposing it and increasing its contrast and saturation. The shadows were also heightened in order to mute any color along the sides of the tunnel, which now appear nearly all black. As the tunnel approaches the light, however, its details become clearer. The shadows within the tunnel and the light at its end symbolize Everyman’s journey across the play. At the very beginning, Everyman is avaricious, narcissistic, and selfish. Shadows in the foreground represent these qualities which hang over Everyman like ominous fog. Conversely, the brightness conveys Everyman’s death and the redemption Everyman aspires to as he enters the grave. He sheds his negative qualities, emerges from the shadows, and approaches the light at the end of the tunnel.

Notably, the ending of the play is ambiguous: God and Death carry Everyman out, but we are never told whether Everyman has been forgiven or not. Therefore, while we might interpret the light at the end of the tunnel as Everyman’s redemption, it may also signify the promise of salvation, if God grants it. The position of the figure in the very middle of the tunnel reinforces this idea. It is not exactly clear which direction the figure faces. He/she could be exiting the tunnel and walking towards the light, or he/she could be walking towards the foreground, plunging him/herself into the darkness. As a promotional tool, this aspect of the image heightens suspense around the play’s outcome. Will Everyman redeem himself and emerge from the tunnel, or will he shrink back into the shadows of his inherent flaws?

Scrolling down the Facebook event page, the second item to come into view is the event description. The beginning of this invitation reads like a wedding invitation: “The reader of this message is cordially invited to the death and burial of Everyman.” This style emulates that of performance, especially the scholarly introduction given by the Doctor. The event description also makes light of a very serious topic: death. While our performance explores the serious themes of isolation, corruption, and redemption, it often does so with the aid of humor. For instance, while Knowledge and Five Senses discuss corruption within the Catholic Church, Death (dressed as a priest) and Goods race to the center of the stage for a sexually charged, comedic demonstration of priestly debauchery. The Facebook page echoes this interplay between comedic elements and dramatic themes.

A sequence of memes is another major component of the Everyman Facebook page. Created at imgflip.com, this series of images stylistically follows the cover image, and echoes the event description by incorporating elements of comedy and drama that hint at major themes, characters, and events from the play. 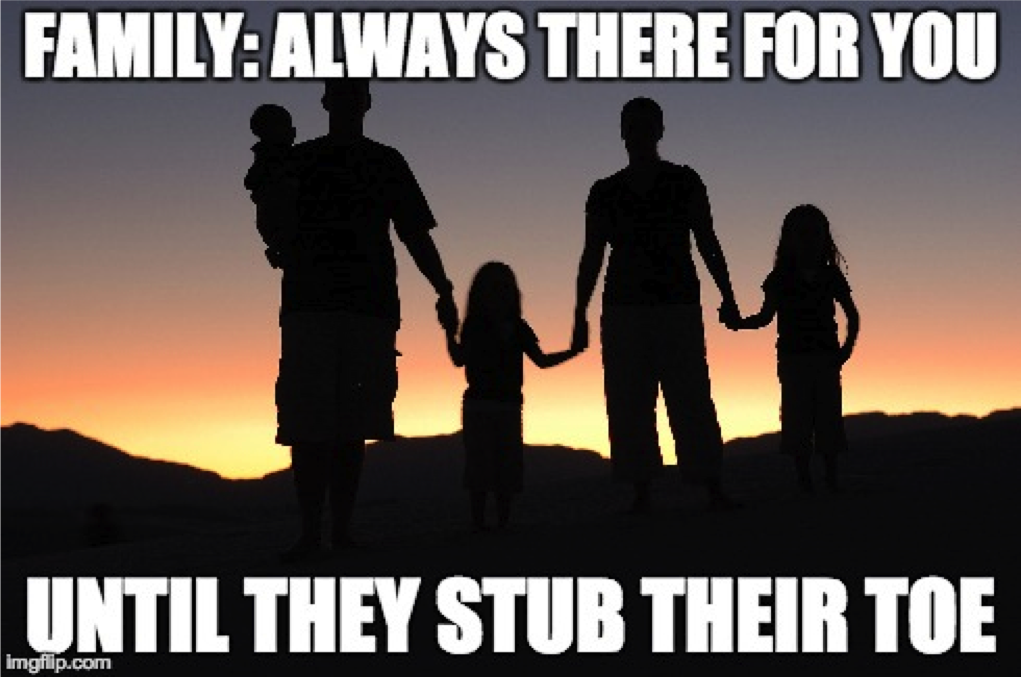 For Family’s image, for example, one imagines a family as a stable presence in one’s life. Family is “always there for you.” The meme takes a dark comedic turn, however, with the second line of text, “Until they stub their toe,” a reference to a moment in the play where Everyman’s father claims he’s unable to accompany his son to his reckoning because of a cramp in his foot. Much like the figure in the cover photo, family is visually represented in black silhouette. Here, too, family has no fixed identity. The figures in the image could represent anyone’s family, asking  viewers to question the relationships they hold most dear. 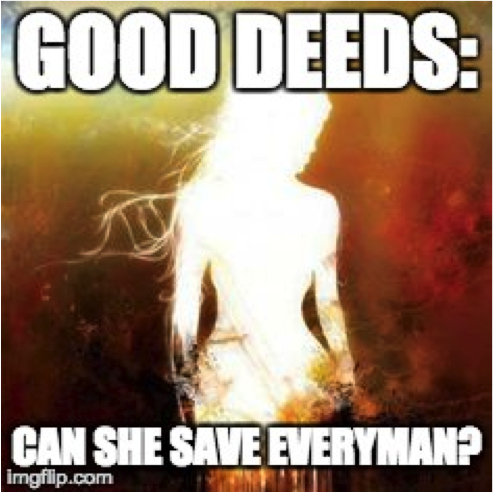 Good Deeds’s image stands out in striking contrast to Family’s. She is the only character who appears in white silhouette among these memes, a choice that reflects her role as Everyman’s hope in the play. When Everyman confesses his sins and punishes his body, Good Deeds emerges stronger, clears his book of account of black marks, and leads him to judgement at the end of the play. Similarly, the figure’s coloring recalls the light at the end of the tunnel in the cover photo.  Good Deeds’s image thus symbolizes Everyman’s redemption.

These two memes were part of a much larger set of images posted to the Facebook page, one at a time, during the weeks leading up to the performance. Everyone who was invited to the event  thus received regular reminders about the performance. The event page was only one part of a successful media campaign that not only spread the word to a large audience, but also provided a space for audience members to post pictures and reflect on their experience. By remaining consistent with the themes and style of our performance of Everyman, Facebook allowed the performance to have a life both before and after April 26th, 2015.