Teachable Moments: The Doctor’s Play with Space in Everyman

A crowd murmurs with excitement before the lesson begins. In our production of the medieval drama Everyman, a Doctor teaches the lesson, but for me, the actor playing the Doctor, this scene was all too reminiscent of my time as instructor in a real academic setting. I worked as a teacher some summers in Philadelphia, and I was surprised to realize how my experiences in front of the classroom informed my portrayal of the Doctor, the fictional theologian and narrator of our “moral play.” In this way, my role echoed medieval dramatic traditions, in which actors drawn from the community would play roles informed by their real life professions.

Typically, actors in the Middle Ages were not professional but were cast from the community at large to play varying roles, either one role or a bevy of small roles. Due to the vast scope of dramas like the biblical cycles, half a town could be recruited to perform in the plays. The town crier would become an angel; the butcher would become one of Jesus’s torturers; etc. This would add personal weight to many scenes for the audience and lend emotional depth to the actor performing as a version of their real life self. Actors would be able to draw on their own lived experiences to enact their roles. I found myself putting this “medieval method” into practice as I played the Doctor, drawing on my background as a high school literature teacher. 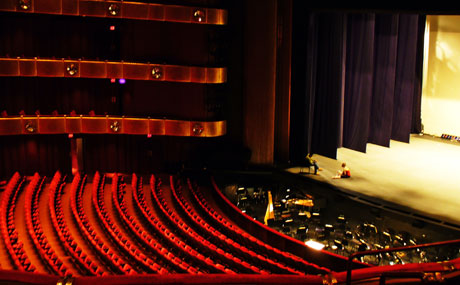 The David H. Koch Theater of Lincoln Center. Note the separation between audience and stage; it is difficult for an actor to invite participation.

One result of this medieval approach to casting is the dissolution of the proverbial “fourth wall.” The notion of the “fourth wall” comes from the idea that the world of the play is “walled off” from the real world by an invisible barrier that follows the edge of the proscenium stage. Audience and actors are separated from each other, making it difficult for actors to invite participation. Were Everyman created for this kind of a theater space, the character of the Doctor would not exist, and the play would not allow a character to acknowledge the different space of the audience. 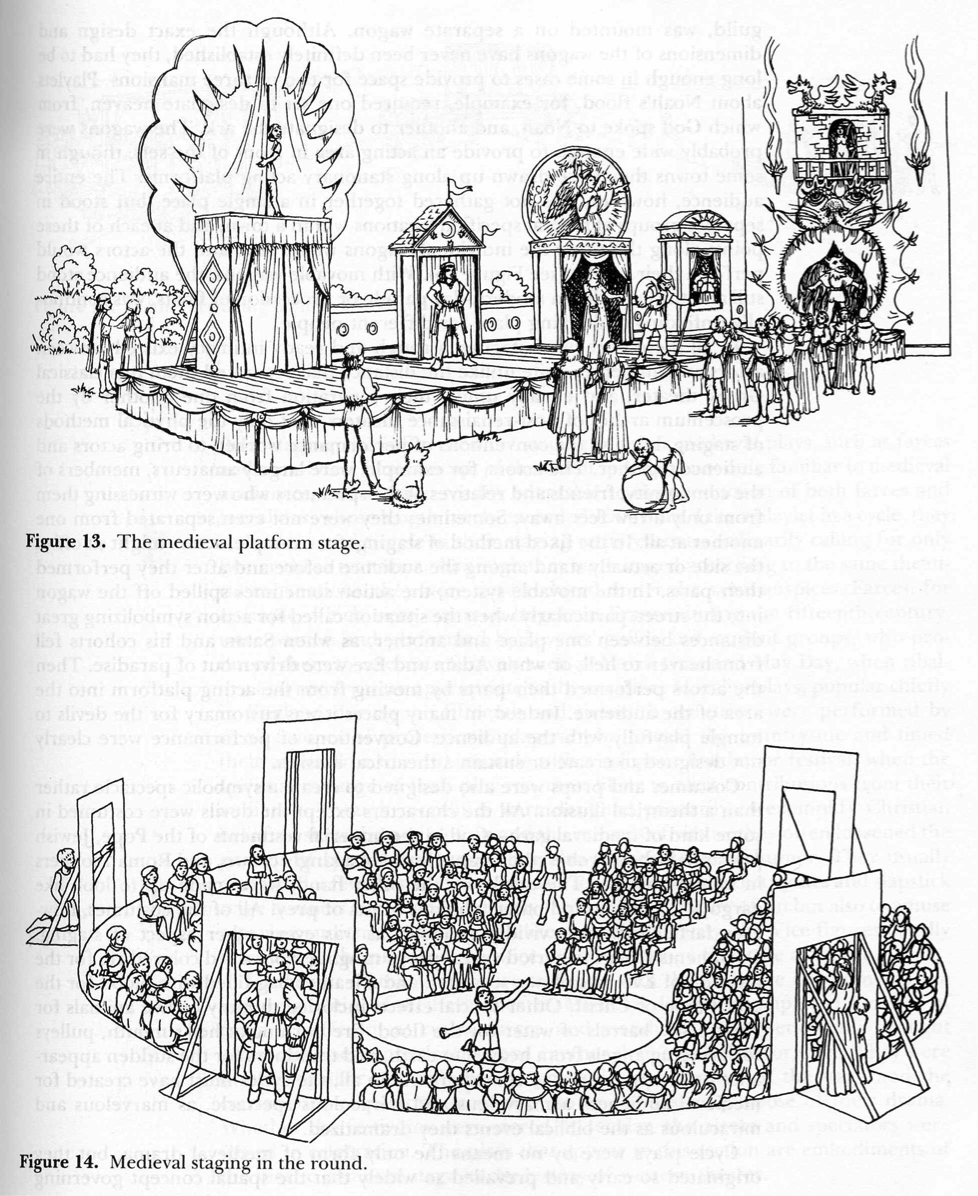 A diagram of a place-and-scaffold theater and theater in the round. Both have spaces closer to the audience to invite interaction.

In traditional medieval staging, however, space is not cordoned off so clearly; audience and actor cross easily into each other’s space. This kind of staging invites the audience further into a dramatic world that they would pointedly regard as similar to their own, an effect strengthened when actors on stage play roles that resemble their real-life occupations. Players thus straddle the real and dramatic world, creating in effect a “quantum staging” that is both real and theatrical at the same time. Just as Death and God seem to exist “on this very stage today,” as the Doctor says at the opening of the play, the audience also exists in the theatrical world. In the time of performance, the audience is invited to play along with the actors, and a drama like Everyman truly becomes a game of ‘play,’ not a work of drama.

In this way, Everyman is a work concerned with humanity but also a play that seeks to have fun with the audience. Moments of direct address, including the Doctor’s, are moments when the audience is invited to participate and learn. For our production, the Doctor’s opening speeches help the audience feel more comfortable with God’s and Death’s Middle English, which can sound archaic and difficult to the untrained ear. At the same time, he invites us to have fun with the language through his rough approximations of the Middle English speeches, so that the audience is not overly concerned with discerning the dialect. Likewise, the Doctor’s final scene is warm though serious; even when the play turns tonally heavy, the Doctor still returns to explain the takeaway. He doesn’t talk down to his audience; he offers the summary note at the end of a book.

In both the original and our version of Everyman, the Doctor’s clear statement of the play’s takeaway message extends a moral message. He calls for the audience to change their lives, and the lack of a fourth wall encourages their participation. This is what morality plays aimed to do: they were written with the reformation of their medieval audiences in mind, which is why Everyman is both a character name and a metonym for all Christians who will undergo judgment at the end. Through figures like the Doctor, our production of Everyman forced a modern audience to face a vision of medieval morality adapted to modern times.