EveryCostume: How We Dressed a Medieval Play for 2015

Budgets, symbolism, modern English and Middle. These are some of the factors that influenced our production—an odd list, but only because we designed an odd production, indeed. I was one of the students involved in the dramatic preparation of our performance of the fifteenth-century morality play Everyman in Central Park. As an ex-theater major, this made sense, but I found myself involved in an aspect of production with which I was unexpectedly unfamiliar. One of the biggest questions that surfaced as we were preparing the show was how on Earth were we going to dress everyone?

Hundreds of questions bubbled to the surface as a classmate and I began to discuss this design project we volunteered to undertake. Our script was a mixture of contemporary vernacular, a more formal modern English, and the original Middle English text, with ample allowance for on-the-spot improv. How would this influence our design? We also pondered how to interpret the play’s characters, since we wanted to strike a balance between allegorical and human qualities. We later realized that interpretation and design existed in a symbiotic relationship, that who characters were and how actors portrayed them cooperatively affected our costuming, and vice versa.

There were finances to consider. We wouldn’t be able to dress our actors as they had done in the Middles Ages. One look at wood carvings from the time reveal costumes as elaborate as those at a Renaissance Fair.

Though we couldn’t recreate these beautiful costumes, we could still draw on them for inspiration. We would aim to honor the era of the play and keep those historical influences in mind when we performed and designed. And so we traveled to our shopping destination, armed with a list of ideas and items, and delved into deep analysis about the design choices we were about to make, discussing each character in turn. A few of these discussions were especially revealing.

We decided to dress the Doctor as a professor in suit jacket, tie, khakis, and spectacles. The Doctor stands out as a peculiar character alongside Everyman, the divine figures, and the allegorical figures. He stands out as a character removed from the world of the play, more closely aligned with the audience than anyone else; no other characters directly interact with him. We therefore wanted him to present an erudite, trustworthy figure that would guide the audience into the play during the prologue and out of the play during the epilogue. The Doctor’s speeches, written in a more formal modern English, also identified him as a middle ground character, one aligned neither with the human Everyman nor with the transcendent deities and allegories. The Doctor is an intermediary character, and by having him dress and speak like a scholar, we were able to establish him as the audience’s go-between for the world and characters of the play.

The costume for our Everymen needed to be simple, because Everyman’s defining faculties and attributes existed not on her/his person but outside of her/him in a series of allegorical characters. This is why we chose a simple uniform for all three Everymen, to keep them distinct from other allegorical characters who all have their own individualized look and design. The uniform allowed for variety within universality; Everyman’s half-mask reveals her to be her own person at the same time that she stands in for the whole human race. We wanted to establish the idea that Everyman represents humanity as a whole, though not in the same allegorical mode as the other characters. We chose the color red for Everyman’s shirt and mask because red is the color of blood, indicating Everyman’s corporeality and the life that is slowly leaving him on the journey towards his reckoning. The red also makes Everyman stand out, because no other character wears such a bright color. This fact becomes all the more significant when Everyman is wrapped up in a black shroud and carried off to his death at the end of the play. 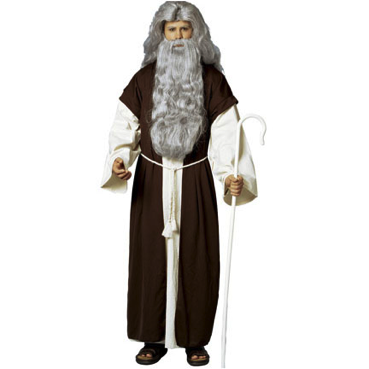 God was the character we delighted most in designing, after we chanced upon his costume in the costume store. The shepherd’s outfit was both hilariously cartoonish and a weirdly accurate match for familiar depictions of Jesus. As soon as we saw it, we knew we had to have it. The costume helped deepen our reflection on a major point that kept coming up in class discussions about the religious plays: how do you represent of the Trinity? In many of the religious plays, the three persons of the Trinity are mentioned in dialogue, even when the plays anachronistically take place well before the birth of Jesus. Here, we decided to represent Everyman’s God not as a father with flowing white beard or a king in gold, but as Jesus on the cross.

Our God not only bore the clothes of a Good Shepherd, he also wore a crown of thorns and had the stigmata painted onto his hands. By having God in heaven look explicitly like Jesus, we altered more customary representations: Jesus is often associated with his human body, especially when he is crucified. From the cross, he calls out to his Father in fear that He has withdrawn in to heaven and abandoned him. In our Everyman, the person of the Trinity who is lord over heaven is not God the father but Jesus in the flesh; because the audience sees Jesus’s body, God’s presence is a secondary identity. This theological problem both complicates and simplifies the Trinity: while it may cloud a few heads because of its unusual iconography, it also shows the interchangeability between the persons of the Trinity. With the added effect that all of God’s lines were the original text in Middle English, we were able to create a God that was both traditional and unconventional.

Finally, Knowledge was dressed in graduation robes and cap, and she carried our textbook as a cheeky meta-reference to the classroom. Though her costume arguably humanizes her character, since a young person dressed in a cap and gown is a familiar sight, Knowledge remains abstract in comparison to Family and Friendship. She is a borderlands character, standing between total separation from and familiarity to the audience. The audience sees her cap and gown and can picture an individual they know who has worn those garments in their presence, but they also see those as symbols that are loaded with meaning: Knowledge does not only represent higher education, but also the capacity of the human mind. The more formal style of her speeches reiterates her status as a boundary character. Like other allegories, Knoweldge is a blend of the real and the intangible. She carries the hefty weight of an allegory while masquerading as a human being, registering both as a human character and as a major metaphysical concept.

Though our production was thoroughly modern, it still is useful to compare our costuming choices to the historical dress of the time. In the end, how accurate were we? Medieval sumptuary laws designated what people could wear according to class and social standing. The lower you ranked on the social hierarchy, the simpler your clothing. Everyman represents the common man, and his/her costume is very simple indeed: the red top, plain jeans, and worn sneakers have no embellishment. A historical thread emerges between our Everymen and the real everymen of the Middle Ages. By contrast, Goods, the epitome of wealth and social status, is dressed in a luxurious ‘20s-era party dress.

Our endeavors with Everyman blossomed into many hybrids and amalgamations. Our English was both modern and medieval, and our costumes helped create multi-dimensional characters that belonged to more than one classification. Human characters could be allegorical, and allegories human. This made designing Everyman a deeply rewarding experience. The challenges were stimulating and invigorating. In the end, we accomplished something that seems impossible to the average college student: we successfully translated and adapted a 600 year old play for modern audiences for performance on the Upper West Side, a real accomplishment worth celebrating.