From Medieval To Modern: How to Give A Voice To Everyman

“You’re going to choose between three groups: Media, Acting, and Writing,” said our professor. The media group would do the advertising, acting group would figure out staging, and the writing group had to write the show based off the play we chose. “You have over spring break to suggest the play you want to perform and to pick the group you want to belong to.”

Over the break, the suggestions came rolling in: by popular vote, Everyman was the winner. Everyone who suggested the play seemed to choose it for the same reason: the characters.

I think Everyman is the perfect choice because it offers both a compelling narrative on morality and interesting characters that can be shaped and altered into new interpretations while remaining faithful to the original text.
–Anthony Guerrieri

Everyman would be an excellent choice because the lack of oppressive stage directions gives us a lot of room for creative license yet the richness of the characters and theme gives us a lot of material to work with.
–Christine Pusz

This play is focused, I think, on characters more than exposition, and that’s important because it’s about character and personality and who we are. Everyman is culturally relevant today because the ideals presented when it was first introduced still hold truth today. Also, there could be some fun in re-articulating what these archetypes look like in today’s modern context.
–Kyle Davis

Everyman uses allegorical characters to examine Christian salvation and what we must do to attain it. The play is an accounting of the life of Everyman, who represents all humankind. All the characters he encounters on his journey are also allegorical, each personifying an abstract idea such as Fellowship, Goods, and Knowledge. How we chose to represent these characters could impact our interpretation and staging of the show and the audience’s take-away from our performance. Each of the characters was an entity but didn’t represent a defined character. The only distinction they had from one another was their words.

So, interested in helping give a voice to these characters, I joined the writing group. Our job was to get the script finalized as soon as possible so that the other groups could base their choices on it. We were the framework of the ship, responsible for additions, cuts, and translations. Armed with the original Middle English text and a semi-modernized modern English translation, we got to work.

It was no secret that we were showcasing this play in the middle of Central Park in New York City. It was also no secret that this was 2015 and not the 15th Century. The audience was a modern one, even if some of them were medieval enthusiasts, and none of them had just taken a course where they studied Middle English playtexts all semester. Since the performance was Central Park, we also had to consider that tourists and passersby from all walks of life could possibly stop to watch. We wanted to keep them watching, and to do that we had to make sure they understood what they were hearing.

How, then, to translate what a character says in Middle English without losing its impact on an audience? Sure, getting an easy laugh here and there wasn’t difficult—in fact, the joke that got the most laughs, the Father’s “cramp in my toe,” was taken directly from the original text. So, we decided to give most of the characters a modern voice; otherworldly characters such as Death and God would retain their Middle English lines. Beauty was in the mood to take a selfie. Everyman would text Five Senses for help. We worked to adapt their lines in modern English while still keeping their allegorical representations accurate. For instance, in our version of the show, Beauty’s Middle English lines “And what, sholde I smoder here?” (796) becomes “The lighting is terrible in there and I’ll barely be able to breathe!” Beauty keeps her modern persona with the mention of her mirror, playing off modern stereotypes, but she still keeps the core of the original line that roughly translates to her being smothered in a grave.

The approach to translating God and Death’s lines was difficult to decide. These were otherworldly, fantastical beings that set the tone at the beginning of the show. Their words had to be clear while sticking close to the original text. So the writing group had a debate: Should we rework their lines in modern English or have the stick with the medieval original? We came with a compromise: when talking alone or to each other, God and Death will talk in Middle English. When talking to characters other than each other, though, they will talk in a modern and formalized sort of English, something with a Shakespearean feel.

The choice to keep God’s and Death’s lines in Middle English gives the audience the sense that these characters are on an entirely different plane compared to everyone else in the play. Though Middle English isn’t too hard to understand, hearing the sounds the words instead of reading them on the page and pronouncing as you go makes it more challenging, and it gives status to both God and Death. They use language that is older and outdated; they have been in this universe for a long time. When talking to a character that’s more earthly, they change their dialect to relate not only to the other character but also to the audience.

This resulted in stark contrasts. At one minute, Death says in Middle English, “Lorde, I wyll in the worlde go renne ouer-all!” and in the next, “Hast thou forgotten thy maker?” in modern English. Death goes from an all-powerful being to object of Everyman’s ridicule in the span of a few lines, all because of how he speaks to Everyman.

We knew going in that our classmates wanted multiple people playing the role of Everyman him/herself. Everyman was tasked with being both modern and relatable; we wanted the audience to put themselves in Everyman’s shoes so that they could truly understand the meaning of the play. We thus did our best to make the lines gender-nuetral, to make sure that any person of any gender (not just male or female) could be Everyman. Everyman was written at a time when the Catholic Church was the dominant religion over Europe, and so the show works with an odd premise for a modern audience that lives at a time when religion isn’t as pervasive. Even so, the play still keeps Everyman’s fate ambiguous so you can put yourself in his shoes. We tried to retain this by emphasizing the fact that Everyman is meant to be everyone, but giving his character a modern update, as early as his first line in the play: “[spots DEATH, takes headphones out of ears] Where’s the Renaissance Fair?”

Goods and Her Entourage

The writing group immediately thought that Goods would be a female character; her allure and temptation would be wasted on a miserly male moneybags type. The words “femme fatale” and “dripping in diamonds” were thrown around until someone suggested that we give her an entourage. It was the “Aha!” moment we had been waiting for. Goods was to reek of temptation and then mock Everyman for having chosen to love something like her in the first place. Having the Entourage mock Everyman at every turn just reinforced Goods’s command not just over Everyman but over every man. In the original play, Goods even tells Everyman that she is the reason he needs help on his journey: “For bycause on me thou dyd set thy mynde / Thy rekenynge I haue made blotted and blynde / That thyne accounte thou can not make truly / And that hast thou for the loue of me!” (418-21). Goods knows what she is doing: we can infer that she has caused others to fall before. Those victims could even be her entourage. They are the visual representation of what she is capable of: creating blind worshipers to cater to her every need.

Friendship was another character who clearly needed a modern revamp. Originally named Fellowship, he was easily equivalent our modern day frat boy, one of those “ride or die” brothers who wears his hat sideways and seems to always be drunk. Friendship’s drunkenness built out from the character’s dialect, especially when he says, “Whoa, that’s some serious shit!” like a true “bro” would. It all fit surprisingly well without giving up the traditional meanings of the character. Friendship’s purpose remains the same. He comforts Everyman when he needs him but flakes out at the last minute when he hears that Death demands a reckoning. 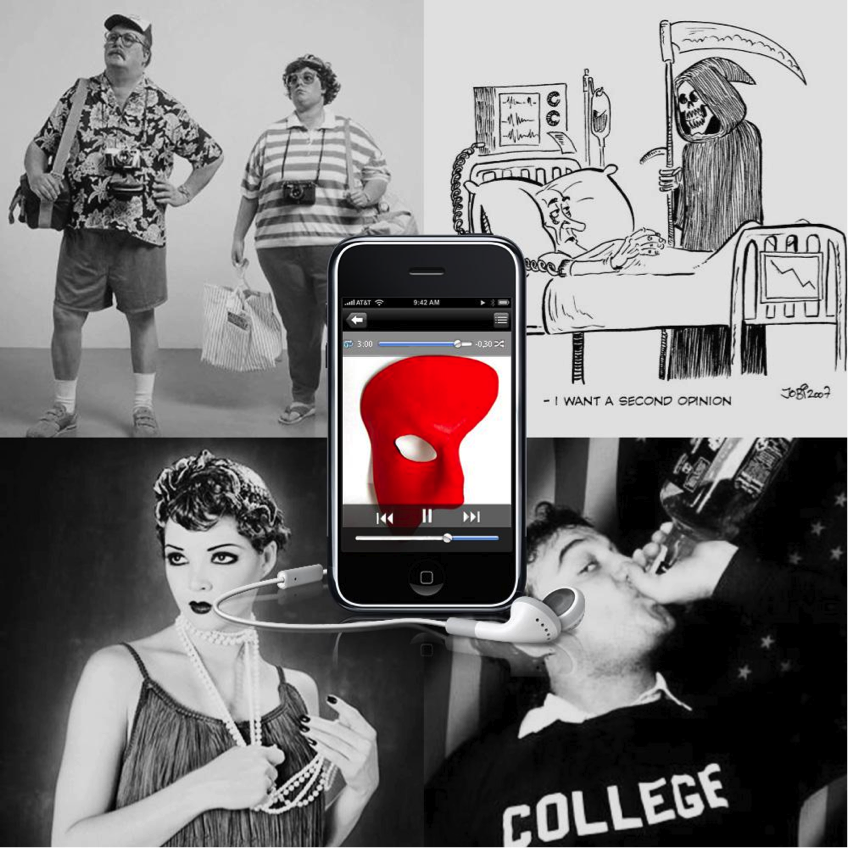 Overall, being part of the group that worked with the text to bring it to life for a modern audience was a rewarding challenge. We really had fun with building each character from the ground up, all with their individual voices and personalities, and we knew our contributions would have an impact on how the show was performed. I felt a sense of fulfillment when we tackled Everyman and came up with something we all could enjoy.