After a semester reading medieval plays and studying their historical and modern performance, it would be difficult for me not to compare our production of Everyman with its historical predecessors. Using Stanton Garner Jr.’s conception of theatricality as “the ways in which a play exists in the moment, as well as all the aspects of performance which a play draws upon” (274), I seek to find the differences and similarities between the theatrical conventions of medieval productions of Everyman and our modern staging. Through this comparison, I want to examine ways our performance perpetuates or deviates from the abstract significance of the material reality its medieval antecedents sought to represent.

In comparing the theatricality at work in medieval productions of Everyman and our own, I find that while minor differences arise, our performance is in keeping with the tradition of the play to privilege the allegorical over the material. Some of the ways this effect is achieved can be illuminated by reference to Ariel Freedman’s “Sorting Through my Grief and Putting it into Boxes,” a theoretical work analyzing the use of comic book conventions to represent pain in David Small’s graphic novel Stitches. I find unexpected resonances between how the graphic memoir and our performance seek to convey abstract significance.

In his work, “Theatricality in ‘Mankind’ and ‘Everyman,” Garner states that medieval productions of Everyman operated under an “ascetic suspicion of the physical” (282). An actor’s or prop’s objectness was less important than what its presence as an object represented. One way in which performance achieves this effect is through the grouping of characters in staging and action. When actors move in these groups, “they do so with an almost processional simplicity” (281). This shifts the audience’s attention away from the bodily presence of individual actors, impressing upon them the play’s focus on allegorical rather than material identity. In Garner’s view, the staging of medieval productions of Everyman was thus somewhat subdued and limited in its use of props. The purpose of the actors’ presence in stage space was to highlight the consequences of the spiritual actions of their roles in the narrative. In this way, the performance of Everyman seeks to suppress the value of material objects through theatrical means in favor of emphasizing the invisible spiritual pattern that provides the narrative with its moral.

If medieval drama is to privilege allegory, the few props used in productions should be immediately recognizable as signs; any visual in the stage space should clearly refer to the readily recognized human characteristic that allegory depends on. We can see this visual aesthetic at work in our production of Everyman. Set against Summit Rock’s naturalistic stage space, the subdued visual theatrics of our actors’ costuming prompts the audience to recognize the actors as allegorical signifiers. In keeping with Garner’s “ascetic suspicion of the physical,” the playtext directly informed our choices in costume and props. The simple costuming of Strength, for example, connotes brutishness and obsession with fortitude. In this way, Anthony’s objectness deflect presence in favor of meaning. His clothes make his presence on the stage suggest nothing but what his role allegorizes: his bicep bearing tank-top and biker bandana are readily recognized signifiers that point not to the human complexity of Anthony’s character but beyond to the abstract significance of his role in the play.

Likewise, the grouping of characters in our production grants the actors the flexibility needed to convincingly play multiple roles. Before the play even reaches its halfway mark, seven of the seventeen characters have finished their scenes and are absent for the rest of the play. This formal quality of Everyman suggests that the performance would have had actors playing multiple roles, even in the Middle Ages. Through doubling, the audience is less apt to focus on the bodily objectness of unique characters, instead viewing them as variable matrixes instead of individuals made up of complex particulars. By turning the audience’s attention away from the bodily uniqueness of individual actors, Everyman simplifies the task of recognizing the mobile allegorical significances to which each actor’s presence seeks to refer.

“By turning the audience’s attention away from the bodily uniqueness of individual actors, Everyman simplifies the task of recognizing the mobile allegorical significances to which each actor’s presence seeks to refer.”

Our performance of Everyman similarly utilizes the grouping of characters and subdued staging to privilege allegorical identities. Most of the actors who enter the play space in our production do so in groups, and the consistency in their formation implies the lack of focus Everyman places on the individuality of its characters. By ignoring human uniqueness and interiority, our staging simplifies the spectator’s recognition of abstract significance. In Death’s entrance, for example, Noah is figured alone on stage, his stylized, skull makeup supplying a striking visual that betrays a theatricality that steers us away from focusing on bodily aspects. In later scenes, Noah, still in makeup, is paired with other actors as Death infiltrates Everyman’s world in a variety of guises; this illustrates the potency of grouping characters to relay allegorical identity. When Noah enters the stage space as a member of Goods’s entourage, the striking effect of his makeup is lessened. With Noah surrounded by the other actors in the entourage, the audience meets an array of visuals to move their eye across, lessening the temptation to focus on the bodily objectness that Noah’s sole figure offered in Death’s introduction.

The effect of these contrasting scenes reminds me of an experience we underwent in class, during an acting workshop led by Kareem Fahmy. At one point in the workshop, we were instructed to focus on the emotional responses we had to the sensation of different textures in the room. I noticed a disparity between how I felt when touching rough surfaces as compared to smoother ones. When my hand moved across frictionless surfaces, I was focused on the immediacy of the action. Without interruptions in the texture, I experienced a similarly uninterrupted attention span. On the other hand, when I ran my hand across more jagged textures, I felt less entrenched in the moment; the instability of my thoughts mirrored the unfinished feel.

The two instances of Noah’s appearance in our Everyman performance discussed above engender this same effect. During Death’s first appearance in Everyman, where Noah appears in the stage space by himself, the space around him allows the audience to fully engage in the spectacle of his stylized form with concentrated focus. Scenes where Noah appears in a group interrupt the audience’s visual perception, just as the rough textures interrupted my mental focus, removing us from the bodily presences on stage and pointing us to the abstract significance the characters’ presences represent.

The introduction that opens Everyman focuses the audience’s attention on what is present and what it is meant to signify in ways that reinforce the effect of costuming and grouping. In the original play text, the main action of Everyman is introduced three times over by three separate characters: the Messenger, God, and Death. According to Garner, the effect of these repeated summaries is to distance the audience from the narrative’s events. By telling the audience the play’s plot in advance, these opening scenes remove the audience from the immediacy of the play’s action so that it no longer participates in the unraveling of the narrative. Instead, the audience is focused on the meaning that these events seek to convey (282).

Our performance of Everyman holds onto this tradition through the characters of the Doctor, God, and Death. By summarizing the journey that Everyman will take, these characters’ statements make it easy for the audience to focus on the meaning of the actions in the play rather than the narrative trajectory of the performance. For instance, when Knowledge brings Everyman to Confession, she announces that journey and its destination in her speech. Thus, when Everyman arrives at Confession’s fountain, the audience’s attention is not drawn towards the presence of this new character on the stage, but instead to what that presence signifies. 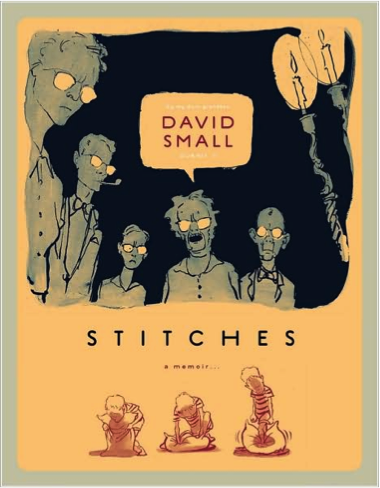 My reading of Freedman’s theoretical work helps me better understand how the theatricality of our performance operates. In her analysis of the representational techniques of David Smalls’ graphic memoir Stitches, Freedman discusses the effect of the memoir’s graphic panels and the spaces between them. In the comic book medium, panels suggest both time and space. In Small’s memoir, the panels are not clearly defined by square outlines but are bounded by blurred edges. This suggests the lingering effect of the abstract significance that the visual contents of each panel represent. This kind of blurring appears on the cover page of Small’s memoir, where an image of his grandmother speaks the words “David Small” in a speech bubble, which also serves to name the author. The blurred edges of visual boundaries on the cover page suggests the permeation of being named and defined by others in Small’s life.

In the same way that Small achieves this lingering effect through visual panels and the spaces between them, the blurring of boundaries between the spaces of the play world and the real world causes a permeation of one into the other. Once they have completed their scene, actors move from stage space to the sides of the play area, but they remain visible to the audience and also watch the action like audience. The movement of the actors into a space connected to but slightly beyond the play setting creates a suspension between the play world and the real. Theatrically, this method of staging blurs the division between the audience and the actors, making the audience more open to engaging with the world of the play.

In this respect, our performance further echoes its medieval ancestors. Where the subdued staging and reduction of human complexity for the purposes of allegory work to distance the audience from the immediacy of the play action, making them observers rather than participants, retaining off-scene actors within view of the diegesis of the play produces an opposite effect. The blurring of play world with real world conflates the participatory roles of the play actors and audience members as, for instance, when Friendship moves into spectator space to flirt with an audience member. Though we may not know much about medieval productions of Everyman, typical staging formats of the period allowed for a similarly fluid definition of audience and play space.

After taking a critical look at our performance and the ways it draws upon the theatricality of medieval productions of Everyman, I’d venture to say that we provided the audience with a more playful experience than what Garner imagines, at least. While drawing upon the conventions of historical performance that privilege allegorical meaning over present identity, our performance goes further by way of comedy. Our allegory takes on parodic qualities, as Gaby’s motherly figure, by emphasizing certain characteristics to comic lengths. Furthermore, our unconfined staging space and the movement of our actors within it drew the audience compellingly into the world of the play. Similar to the way medieval drama worked, our performance granted the audience significant freedom to engage actively with the play and thus to receive the meanings we aimed to represent. We might go so far as to say that our Everyman was a performance of medieval theatricality, at the same time that it offered a successful reimagining of its conventions.

Ariela Freedman. “‘Sorting through My Grief and Putting It into Boxes’: Comics and Pain.” In Knowledge and Pain, edited by Esther Cohen et al. Rodopi, 2012. 381-98.