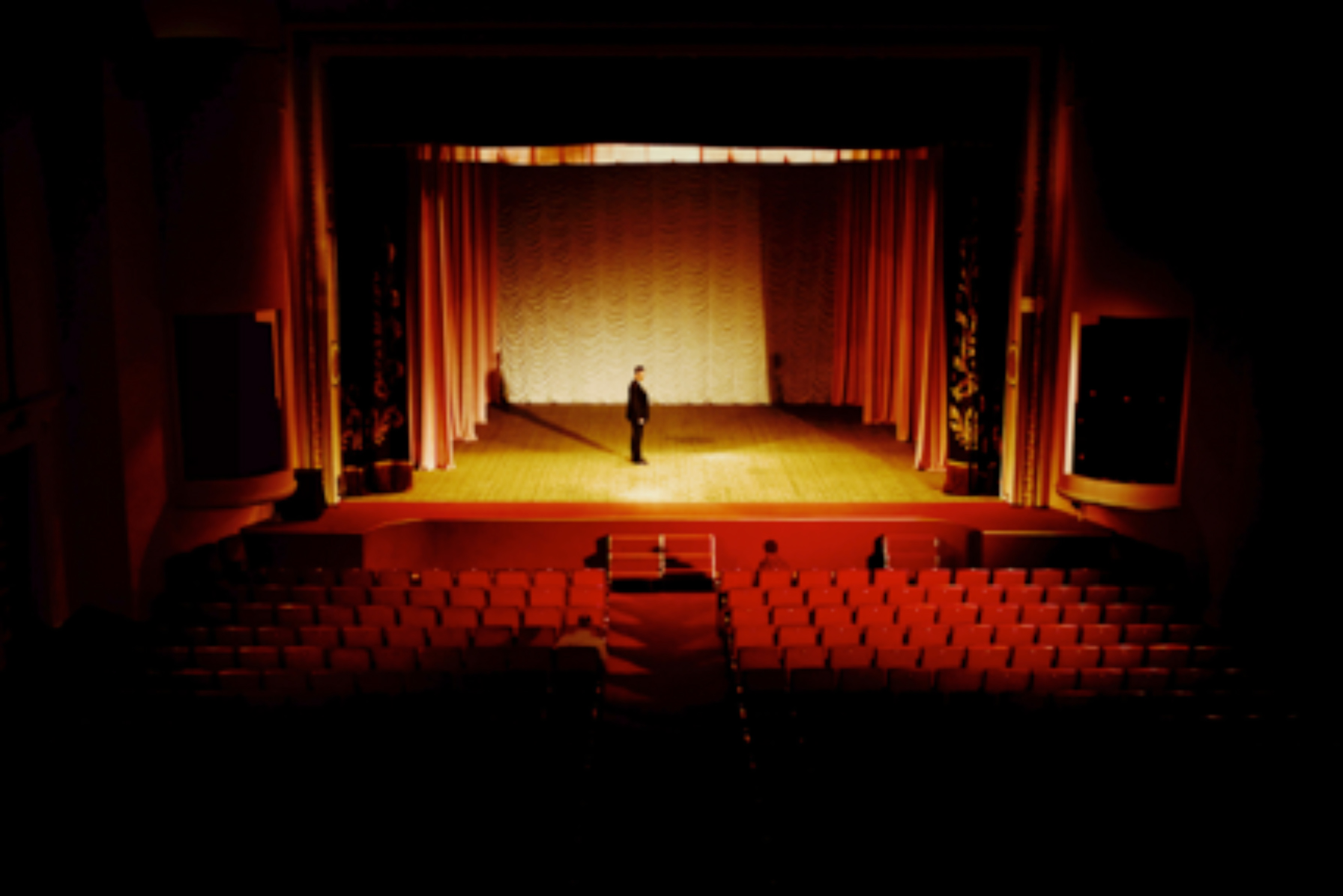 The proscenium stage of the modern theatre

When we think of theatre, several things come to mind. A stage. Actors on the stage. A proscenium that frames the stage. An audience in seats on risers. Curtains. Lights in the air. Maybe music. A skull, thanks to Shakespeare. Theatre, however, wasn’t always a conglomeration of these things. Actors or bodies for performance, “a stage” or a space to perform within, music and/or rhythm, and an audience have been and are key elements to theatre. A seated, still, silent audience; curtains; theatrical lights; and even that skull have not always been. These elements emerged from modernist theatre.

Historians mark the beginning of modernity in Europe in the seventeenth century with its (seeming) end somewhere within the twentieth century. I say “seeming” because modernity is a stubborn weed whose roots are firmly grounded in today’s theatre. Enlightenment logic and scientific reasoning are seeds that grew in modernity and found fertile home in this art form. They have stifled and limited theatre to an intellectual labor: an actor in a performance is expected to think constantly as their character would think, as if that character were a real, complex, rounded human being. This concept is most blatantly reflected in Stanislavsky’s acting techniques, in which naturalistic movements and psychological motivations of a character are the driving forces of a plot-driven narrative.

This isn’t to say that all modernist theatre is bad. It has provided us with playwrights like Thornton Wilder and theatre theorists like Bertolt Brecht and Antonin Artaud. However, these artists were radical and reactive: they challenged the expectations of modernity and forged new pathways, understandings, and aesthetics for theatre-making. Brecht, Artaud, and Wilder combatted the expectation that psychological realism is the only and the best way to make theatre. They pushed back at the assumed values of theatre as an art form, the limitations of which still inform nearly all of our theatre today.*

So, what the heck does modernist theatre have to do with medieval drama? In short, all that modernist theatre is, medieval drama is not! Instead of naturalistic movements, actors run around and jump onto levels solely to catch the audience’s attention. Instead of deep psychological motivations, actors react to the audience in the moment and make fart noises with the crook of their elbow to get a laugh. Instead of a plot-driven narrative, medieval plays offer a melange of silly sex jokes and genuine Christian moral questioning. 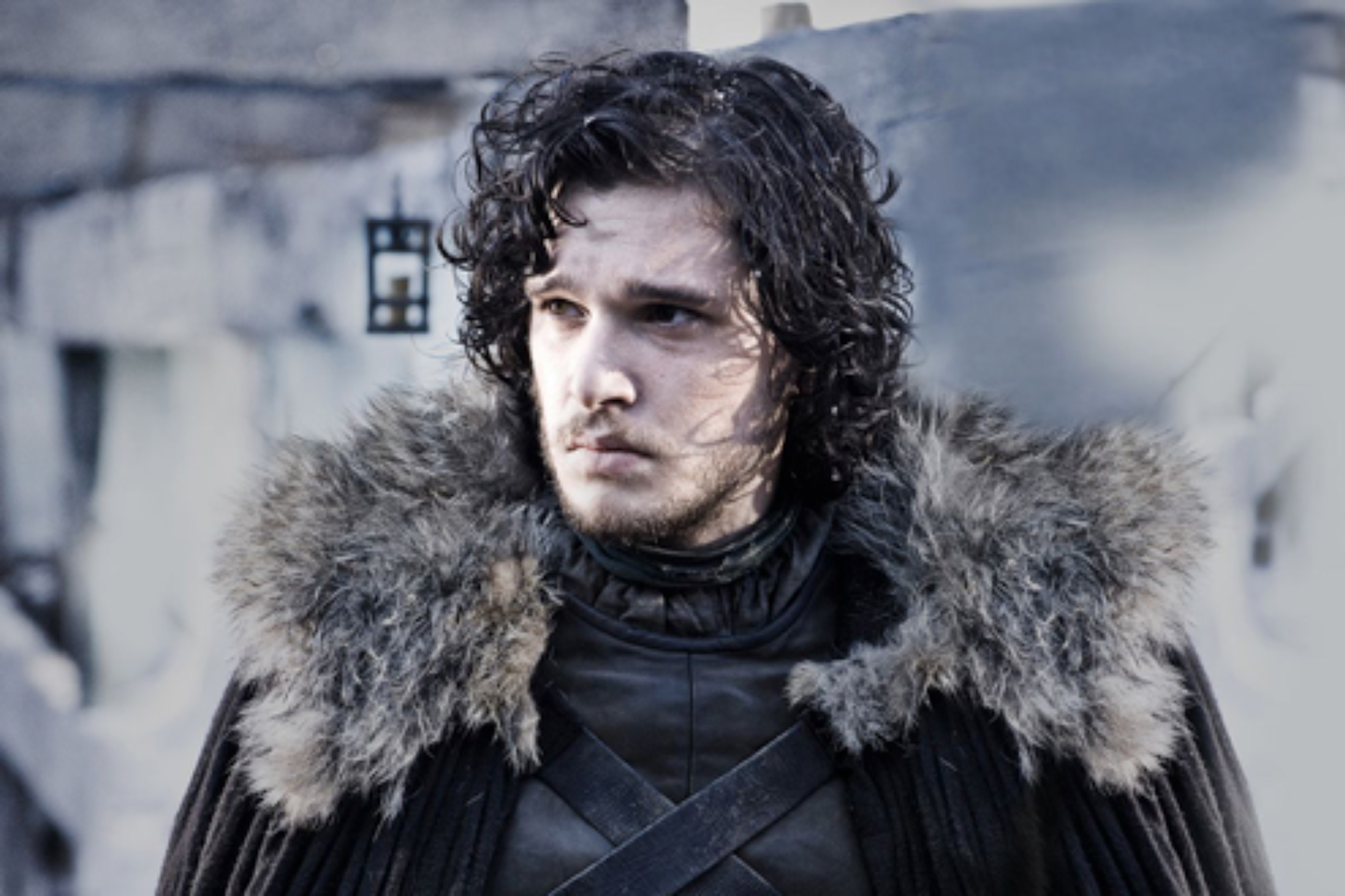 You might wonder, What? How did the Middle Ages, inspiration for the rugged, fur-draped Kit Harrington and his permanently sullen yet sultry pout, also make plays full of penis innuendo? I had similar questions when we began studying medieval drama. Today, we have an idea of the Middle Ages as a period of solemnity, honor, magic, and women in empire waistlines. However, we associate these attributes and images with the period because of received cultural narratives that replace historical accuracy with cultural fantasies.

There is financial profit in reinforcing this fantastical aesthetic—consider the success of Game of Thrones and the forever relevance of the Shrek franchise. A sociopolitical hierarchy is also at work within an aesthetic that accepts and embraces white patriarchal dominance. Contemporary media depicts the Middle Ages as populated entirely by white people. Black and Brown folks are assumed not to have existed in the European Middle Ages—which they did!—except in the person of the Other, the evil foreigner or barbarian invader, who ruins the peace and infiltrates the territories of a white European world (Carroll). This cultivated fantasy, sustained by medievalist storytelling from Sir Walter Scott onward, has come in more recent times to be cherished and upheld by white supremacists like the Charlottesville nationalists (Elliot; Sturtevant). Soul sucking stuff. However, it is a conditioned assumption that we can overturn by studying the real histories and cultural practices of the Middle Ages.

This brings us to what I love most about theatre: design. How one approaches a theatre piece informs how one designs it, and for our production of Wisdom, I wanted to approach the play with these critiques firmly in mind. As a scenic-lighting designer, my job is usually to gather and position scenery pieces and lighting instruments to tell a story. For our production, though, scenery and lights did not need to be designed. Our scenery was the architecture of the street level plaza of our university, and our lights were whatever weather God’s will would bestow upon us (happily, it was a chilly but sunny morning). So instead, I designed costumes with my friends Savanah (in charge of Wisdom, Anima, and Lucifer), Sharon (in charge of the Five Senses), and Lyra (in charge of the Vices’ dancers).

As I began to design, I returned to Meg Twycross’s words on medieval theatricality: “[s]pectacle”—another word for theatre design—“can speak more strongly than words” (26). When I first read this sentence, it stunned me: I seldom read theatre scholars discussing the utter necessity of design. It drove home for me that costumes—not the lines—needed to do the talking in our performance. We had also learned throughout the semester that medieval actors had to do whatever they could to capture “the diverse levels of attention” within the audience (Sergi). With this in mind, we wanted to design the costumes so that they would immediately catch the eyes of the audience and maintain their attention.

The production team, therefore, ruled out any sort of a “medieval aesthetic.” We designed all the costumes with the intention of lowering any barriers to engagement. We wanted the audience to connect with the characters, and to see them dressed in monkish robes would have, we believed, turned them off from the start. There was enough strangeness already in the translated Middle English; we needed familiarity in the characters’ appearances.

So, I decided to dress the Faculties as churchgoers on a Sunday morning and the Vices as rave girls on a Saturday night!

The Faculties are similar to Virtues and are perfectly obedient to God. To reflect this, I costumed them in dresses or skirts that went pass the knee, leaning into the cultural value of “modesty” as a sign of purity. The dresses and skirts were in an A-line style to create an illusion of a waist without showing the natural curvatures of the body. This silhouette aligns with traditional expectations of femininity, with its cultural connections to obedience. The Faculties therefore embodied churchgoing piety not only in their actions but also in their clothing.

The Vices, though? They just wanna go feral and party and show off their bodies. To contrast the Faculties’ modest and obedient dress, I costumed the Vices in all things tight, see through, skin-showing, and glittery—anything that would seduce the eyes (and the hearts!) of any human. Their garb is the very antithesis of good Christian values of purity and modesty. 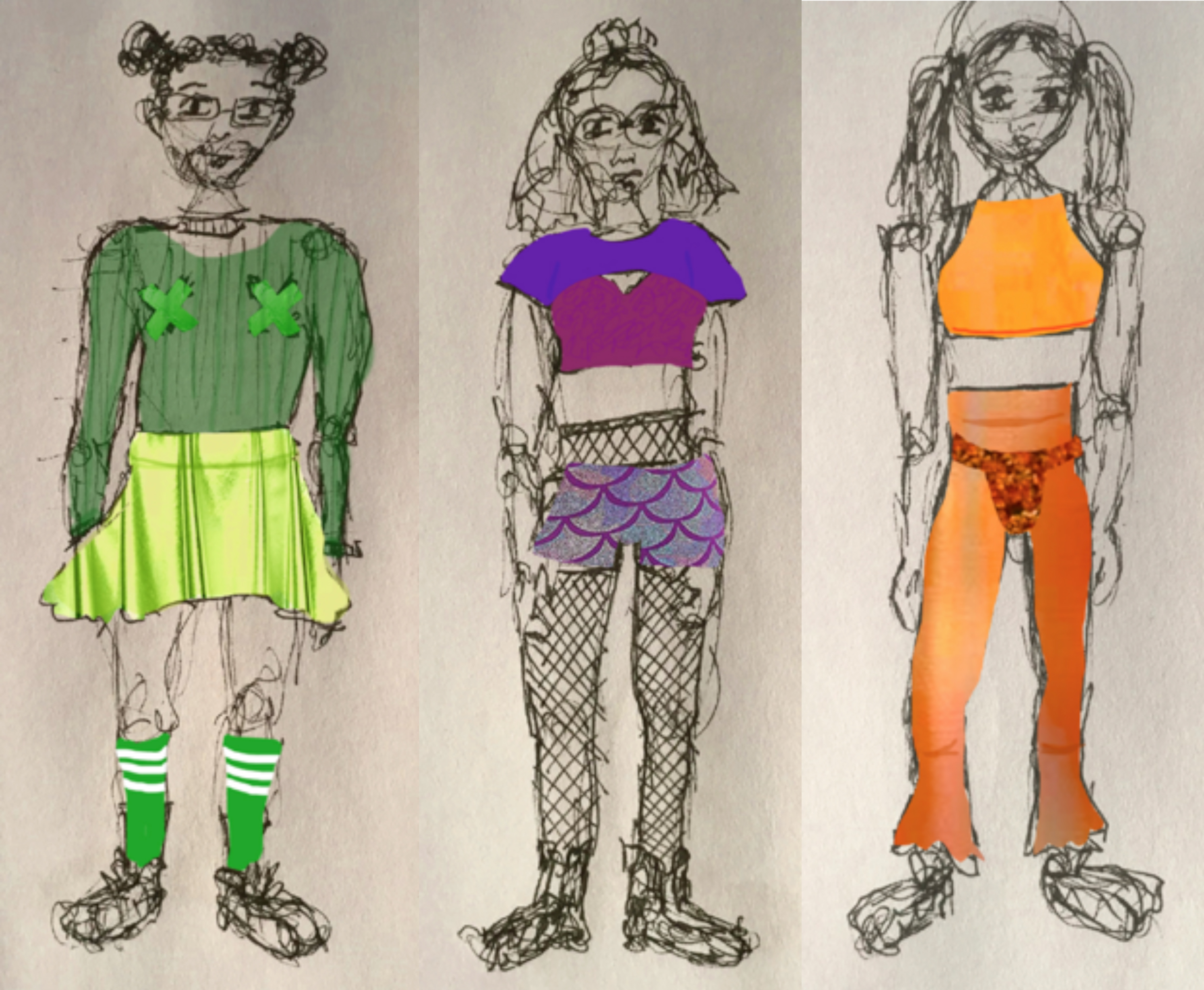 With the Faculties and Vices distinguished, I turned to how to connect them, each to their counterpart. Color saturation provided the answer, with the Faculties in pastels and the Vices in saturated hues. For the Faculties, I chose pink, light blue, and yellow, and for the Vices I chose the loud, fun versions of those pastels, purple, green, and orange. As my friend Rosie pointed out after the performance, the Vices’ secondary colors were the “corrupted versions” of the Faculties’ primary colors.

Additionally, I designed the Vice costumes to bend gender expectations. Gender roles during the Middle Ages were not what they are today, with research arguing that “there was no single, fixed idea of the masculine and the feminine as essential qualities” at the time (Pasternack). I was curious to explore this design-wise. Elizabeth, who played Lechery, identifies as a cis woman, so I dressed her character in what is culturally masculine: baggy, camouflage cargo pants and a bedazzled codpiece. Charles, who played Corruption, identifies as a cis man, so I dressed his character in what is culturally feminine: a mini skater skirt and a sheer, sparkly long sleeve top. I identify as nonbinary, so I dressed Perjury in what is culturally feminine, given the tendency to see “nonbinary” as “androgynous,” which in turn gets perceived as “masculine”: a bralette, fishnets, and booty shorts.

The choice to gender-bend the Vice characters in Wisdom could be seen as counterintuitive to my larger design intentions of recoding the Middle Ages and pushing back at contemporary biases. It poses problems, without a doubt, but this is in part what I wanted to lean into. Many folks do see gender nonconforming identities and expressions as sinful, as unnatural, as sinful, as against God. And yet, here was our audience—a mix of different generations and backgrounds—all laughing and having a good time, especially when the Vices were on stage. These gender-defying characters were entities with which the audience could connect and share joy. Their “absurd outfits” may have been jarring at first or even solicited laughter, but I designed these absurd outfits with the hope that, as the play moved on and as we the performers and the audience shared more time together, the audience would shift their hesitations and dismantle their assumptions as they learned there was nothing to be scared of. There was only joy.

“Aesthetic” is commonly understood as appearance. When we respond to an aesthetic, we respond to what we immediately see. Aesthetics, however, are more than just that. They are what we perceive, how we process what we see, and what we deem acceptable as a result of this processing. Medieval drama, strangely enough, effortlessly challenges conditioned contemporary aesthetics. That’s why we perform medieval drama today. That’s why our class, my friends and I, our wonderful community put on a performance of Wisdom at 10 in the morning on a Saturday and did it with joy. We must share and shout out and say to others, Hey! Don’t be okay with the normal! And the Middle Ages turns out to be a pretty good way to do just that, all the while having fun and sharing laughs and good, good times along the way.

* Thankfully, there are folks (and professors at Fordham!) who are actively combatting this through their work, like Daniel Alexander Jones, Dr. Shonni Enelow, and Dr. Andrew Albin—the very one who made this course and started this community!

Carroll, Shiloh. “Race in A Song of Ice and Fire: Medievalism Posing as Authenticity.” Race, Racism, and The Middle Ages. The Public Medievalist. 28 Nov 2017.