Medieval performance incorporates staging techniques seldom seen in modern theatre. Much of modern theatre consists of actors existing in a world completely separate from the audience; however, medieval performance does not draw a distinction between audience and actors. Within the performance experience, the audience and the surroundings are very much incorporated into the play narrative by discarding the fourth wall so familiar to modern audiences. In its absence, though, it is possible to engage modern audiences in ways that emulate a medieval audience-going experience. In fact, our production of Wisdom was able to use the absence of the fourth wall to cultivate a working relationship with the audience that did just that.

Medieval cultural norms surrounding the theatrical experience followed a different etiquette than the one familiar to modern day audiences. Before acting existed as a profession, many performers practiced a specific trade as members of a guild and put up their play as the guild’s contribution to annual religious festivities. Furthermore, stage spaces in the Middle Ages were not located inside dedicated buildings where theatre occurred. Biblical plays often took place on wheeled carts, proceeding in a parade through a city’s streets. This parade in celebration of the feast of Corpus Christi was part of a religious festival supported by clerical authorities. This habit of performing outdoors meant actors were subjected to the hustle and bustle of the city as well as the rowdy disposition of the passing crowd. As seen in the illustration below, it was common for audience members to wander in and out of performances as they pleased, missing pieces of the plays. In addition, many plays were religious in content and were composed by members of the clergy. Even so, the script was flexible: it changed year to year based on what bits got a laugh and what jokes fell flat, and could be altered to reference current events, including changes in political tides. 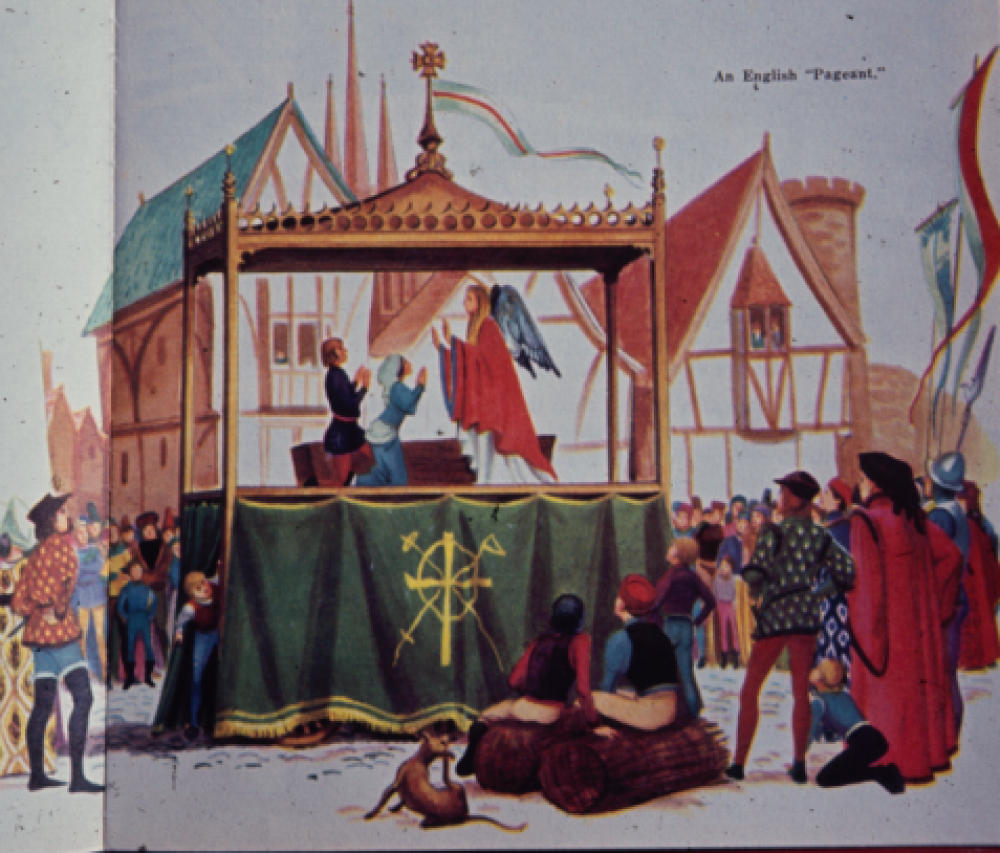 Image of a medieval pageant wagon by Ervina Boeve,
depicting a performance of The Annunciation.
Hekman Digital Archive, Calvin Library.

In our production of Wisdom, we decided we wanted to reproduce a medieval theatrical experience for our audience as much as we could. We had to disabuse our audience of their usual theatre-going etiquette, which included prohibitions on talking, standing, leaving, returning, unwrapping candy, and otherwise “disturbing” the performance. This modern style of spectatorship also includes a stark separation between audience and actor. In order to undo these assumptions, we chose to stage Wisdom outdoors, just as the medieval performers would’ve done, subjecting the actors to wandering pedestrians and the general cacophony of Manhattan. In turn, the actors were instructed to incorporate environmental happenstance into the performance. This included disgruntled Vices yelling at honking cars and striking up conversations with strangers wandering through the performance space.

For the audience, our efforts to dismantle the etiquette-based boundaries between the audience and the actors represented a stark change. They were encouraged to participate with fervor. In Wisdom‘s original playtext, there are clear moments written out in the stage directions and implied in character dialogue that make room for audience participation. From the very beginning of our performance, we made no pretense about expecting this participation. Before the show began, many of the actors danced around the performance space handing out color-coded bandanas. These notified receiving audience members that, later in the show, they would be called upon to participate in what would turn out to be a dance party. Though it may have taken modern audience members time to adjust, ultimately the audience was generally agreeable about participating. Those who were adamant about remaining a spectator were not given bandanas, those who were game took them eagerly. Even audience members not comfortable enough to dance were able to participate in a variety of other ways, including heckling, at the encouragement of the actors, and singing along with the Vice’s song.

Wisdom takes fullest advantage of its Vice-aligned characters for audience participation. These characters lighten the lofty theological message with crude humor and general debauchery. Though this juxtaposition of sacred and profane might seem inappropriate for modern audiences, medieval artists frequently use it to explore proper values and how to handle the temptations of sin. Lucifer and the other associated Vices employ many techniques to involve the spectators. Throughout our production of Wisdom, the Vice figures heckled and made jokes while sitting among the audience. At the start of the play, the audience was not completely acclimated to the reality of audience participation. They were a little hesitant to start heckling, but they laughed at the Vices’ interjections. At the end of the play, Wisdom/Christ delivers a sermon detailing nine ways to truly please God. During this teachable moment, our Vices were busy calling out vulgar jokes. By this point, the audience had grown familiar with the Vices and their ways and were more comfortable with what might have seemed inappropriate heckling towards the actors.

In addition to this, the Vice figures established a very friendly relationship with the audience. By the time the dance party arrived, the fourth wall had been almost completely obliterated, thanks to the many spectacular aspects of the three Vices’ performance up until then. Most importantly, the three Vices consistently directed their speeches towards the audience, acknowledging and playing with their presence. This kind of direct address to the audience, aided by mutual visibility in plain daylight and plenty of eye contact between actors and audience members, helped to establish the spectators and the performers as friendly enough to share personally oriented conversations. This was a particularly prominent feature of my character, Lechery, who frequently speaks directly to spectators outside the designated playing space. Late in the script, Lechery is directed to choose an audience member and speak to the crowd about their ongoing love affair, despite the audience member’s husband. This interactive moment then allows the other Vices to explain how they’ll manipulate the justice system to punish this cuckolded husband into submission. By this point in the play, there had been enough interaction that I could easily see who was comfortable speaking with me in character and who would prefer to remain a spectator.

Another moment of actor-audience relationship building occurs a little earlier in our production of Wisdom through a short musical number the Vices perform. To keep us on our toes, we chose a different song each time we performed the scene. We made sure each time to choose a song that the audience would find familiar, hoping that the audience would begin to sing along enthusiastically with the actors—and, on the day of the performance, this is exactly what they did. This shared song established a lighthearted, engaged relationship between the performers and the audience. We used common ground to enthrall the audience and openly establish the fact that we all, characters, actors, and audience, were living in the same world, an acknowledgment that is very rare in modern theatre. In our case, the actors designed their work purposely so that the audience would not feel alienated.

“Medieval theatre’s disinterest in separating audience and actors was beneficial to our performance, allowing our interactions with audience members to pull the fourth wall down.”

After the song ends, the Vices decide they are going to dance to celebrate their respective sinful domains. The original playtext of Wisdom indicates that these dances are to be performed in three successive waves, suggesting three different dance styles. We chose to perform our dances to popular music easily recognizable by the audience. When the audience members with bandanas were finally brought up to the stage to dance, they willingly imitated the lead dancer to the best of their ability, without feeling judged for the way they danced. This kind of willingness among actors and spectators to have fun together in public could not have emerged without the creation of a supportive and accepting environment very different from customary theatre space. Medieval theatre’s disinterest in separating audience and actors was beneficial to our performance, allowing our interactions with audience members to pull the fourth wall down. Once this stark separation of actor and audience was undone, we could build a connection through commonality, in a way that echoes the approaches of avant-garde modern theatre practitioners who seek to create a more meaningful theatre experience.

In our production of Wisdom, we tried our best to emulate the medieval theatrical experience through many channels. The incorporation of the audience through vulgar heckling, song, and dance allowed the actors to foster a trusting and friendly relationship with the audience. On the one hand, this familiar relationship adds to the theological message of the play: the Vices were able to tempt the audience out of their proper behavior and into boisterous dancing and singing. On the other hand, this approach stands in great contrast to modern theatre etiquette that trains actors and audience to exist in entirely separate worlds, changing the audience experience into one that is arguably more meaningful and immediately felt. In our production of Wisdom, spectacle did not serve as a window into another real world. Instead, it became self-aware of its identity as a spectacle, and enabled actors and audience to become more self-aware as they shared the performance together.