“I Am Called Everlasting Wisding… Wisdom… ah, sh*t”: Giving Up the Script for Our Medieval Audience

I couldn’t remember my lines.

Only two days before our performance of Wisdom and Professor Albin, strikingly unperturbed by my unpreparedness, had to prompt me line by line through entire page-long speeches. His upbeat attitude was incomprehensible to me at the time, convinced as I was that I was failing my classmates, who had all worked so hard to develop our production of the medieval morality play over the past weeks.

My disappointment was predicated upon my modern understanding of theatre in which script is everything. Memorize your lines and your blocking, add a little characterization, and then regurgitate the whole thing on a stage with lights in your eyes, itchy sweat pouring down your back, and the occasional titter from the invisible audience. (While technically a theatre kid in highschool, I in no way have the intellectual understanding and rigorous training of, say, a college theatre major.) Of course, I understood that the medieval mode of performance would be nothing like this, but it was the only reference point I had. Determined to get everything right, I spent the next 24 hours ritualistically going over my lines, writing them down whenever I could and cycling through them in my head everywhere else.

By Friday (18 hours till performance) I felt confident that I had 95% of the text committed to memory. Dress rehearsal proved this to be somewhat untrue, both better and worse than I had expected. Worse because I skipped over entire chunks of dialogue, and better because this forgetfulness didn’t stop me in my tracks as expected; rather, I adapted to the performance in response to my fellow performers. It was in these final run throughs that weeks of collaboration began to pay off with a natural camaraderie and an ability to react and improvise with each other when things went a little awry.

When the day of the performance arrived, I felt as ready as I could be, joining my fellow performers in the nervous recitation of lines in between giggles of solidarity and manic dancing to mid-2000s alt-pop. Then it began. From the moment I stepped out onto the plaza steps, an entirely new performance was born.

Modern commercial theatre draws in an audience with the promise of consistency. Theatre goers tolerate high ticket prices because they have been assured that the quality of the performance they’ve paid for is just as excellent as the ones before and after it, line for line. They are hoping to be transported into a carefully crafted experience of which they are not a part, performed by actors who commit entirely to becoming the characters they represent. Often, the audience will not be familiar with the characters, storyline, or plot, so these must be carefully crafted and delivered for a satisfying experience. Audiences, too, have certain expectations to obey: they are to be silent and attentive, avoiding interruptions of the magic of the play at all costs.

“The lack of financial exchange equalizes the relationship between performer and audience, who can engage in a more open, collaborative creation of a dramatic experience instead of a transaction.”

Medieval drama (I hesitate to call it theatre) lacks this contract between audience and performer. Most productions were put on during feast days or celebrations, where audiences often drank and were fully mobile, coming and going from a production as they pleased. They certainly never purchased tickets. This lack of financial exchange equalizes the relationship between performer and audience, who can engage in a more open, collaborative creation of a dramatic experience instead of a transaction.

The characters and plots of medieval plays are almost always familiar to an audience, drawn directly from biblical scenes or allegorical exercises that borrowed heavily from the Bible. Wisdom belongs to the latter sort, representing an allegorical battle for dominion over the human soul between Lucifer and Wisdom, a thinly veiled Christ figure. While a universal knowledge of biblical tradition cannot be assumed of modern audiences, as a group performing at a Catholic university in the USA, basic familiarity with Christ and the Devil, as well as their mutual enmity, could be presumed for the purposes of our production. Dialogue-driven character development was thus entirely unnecessary, since the audience already knows these figures, and so the focus instead rests on the play’s basic plot structure, stuffed with sex jokes and entertaining gags. From this vantage, the underlying moral lesson of Wisdom serves more as a convenient vehicle for comedy than as the play’s true and sole purpose.

Moreover, during the Middle Ages, an audience was usually acquainted with the actors playing the characters. Plays were often put on for feast days and civic celebrations by specific trade guilds, who worked collaboratively to build the production. This meant that your neighbor Jeff the bolt-maker might be playing Jesus in the play of the Crucifixion. And because of the common processional staging of biblical cycles on pageant wagons, 20 minutes later Carl the baker might portray Jesus in the play of the Resurrection. There is no expectation of suspension of disbelief or lifelike verisimilitude in medieval drama. Rather, medieval drama was performed for the community, by the community.

While it is impossible for us today to replicate the specific social relationships and politics of a medieval community, our production of Wisdom managed to create a successful modern approximation. Our audience was comprised of fellow students, friends of the actors and familiar faces, as well as parents, professors, and curious onlookers. This familiarity with the audience furthered the potential for collaboration, and helped fracture the traditional divide between actor and spectator, both in the physical and the textual sense. 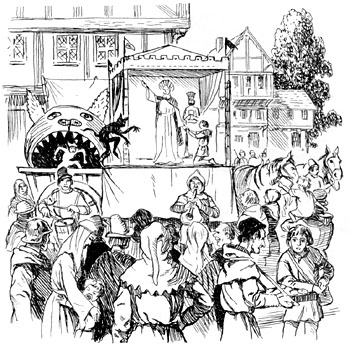 Depiction of a medieval urban pageant wagon with hellmouth

Staging was essential in how we brought the audience into the performance. Medieval dramatic performances often took place atop pageant wagons, portable and often elaborate stages that lifted the performance some six feet above the ground. This was most ideal for moving through crowded festival streets, and increased visibility for a tightly packed crowd. These wagons also allowed for plenty of interaction with an audience, as actors were easily able to move from stage to street level, where they could mingle with and perform amid the closely packed onlookers. In our production, we did away with even this formality of an elevated stage. Instead, our “stage” was demarcated by a line of blue tape on the ground, the only barrier between us and the audience who sat crowded at our feet. Also notable was the bright natural lighting of the production, kindly provided by the sun, which allowed us to see the audience unobstructed. No darkened theatre and blinding stage lights here: we could look our audience in the eyes, opening up a personal feedback loop of their reactions and expectations.

Whole sections of the play that could only be imagined in rehearsal finally came to fruition in the audience’s presence, most notably a dance sequence that relied heavily on audience participation. During rehearsals, we were aware of the intention to have the audience join in, but the scene still felt awkward and laden with expectation. Would our audience be as enthusiastic as we hoped? We suspected that modern audiences would be reluctant to enter the space of a play. But all the features listed above, plus pre-show audience interaction, created just the right atmosphere for our audience to jump in with gusto. In performance, the dance sequence became one of the most joyful and successful scenes of the whole play, with audience members breaking into the space even further by engaging in a tug-of-war with Wisdom as he tries to drag Anima in slow motion from the dance floor.

While it is possible that we lucked our way into an exceptionally agreeable audience, it is more likely that their gamesomeness was a product of the environment we constructed. Even before the show, cast members dispersed through the audience, recruiting them to join their team and handing out colored bandanas, creating a sense of solidarity between cast and audience members. Once the performance began, Corruption, Lechery, and Perjury (the wonderful Charles, Elizabeth, and Alesha) sat among the audience, heckling the performers and breaking the already thin division between stage and audience. A lack of formal seating, stage, or lighting to differentiate the performance from the real world created a shared space between us and the audience, so that the decision to enter the play became a mere matter of stepping over a strip of tape on the ground.

The audience’s level of enthusiasm was still a great surprise for many of us, despite the conscious steps we took to involve them. This surprise speaks to how ingrained notions of consumption are in modern theatre-going experience. Even as we rehearsed with a reactive audience in mind, developed methods to encourage their participation, and received encouragement from Dr. Albin, the concept of audience as passive consumer was hard to shake. Even in non-theatrical media, narratives are scripted to encourage a passive audience that won’t interrupt their viewing or derail the slow and steady build-up to a climax. Ultimately, the experience of performing Wisdom reminded us of the possibilities of theatre as a medium of social exchange, a place where no one is required to be silent and all can have an impromptu role to play.

The addition of a present, reactive, joyful, and participatory audience that Saturday morning wholly transformed the entire play. Their laughter and attention became the gauge of success; I no longer worried about my ability to follow the script. By creating the audience as collaborative members in our dramatic exercise, a space opened up that could contain mistakes, improvisation, self-reflection, character breaking, giggling, joy, and swearing. It finally made sense: the audience didn’t have a script, hadn’t paid admission, weren’t expecting a transporting experience. They laughed along with you when a flubbed line yielded an expletive, they focused more on the environment of camaraderie and interchange than on whether they were getting their money’s worth. The script had fallen to the wayside to give rise to something much more memorable.