Why We Perform Medieval Drama

“Oh, that sounds… nice,” my mom said unconvincingly when I told her and my dad that I was going to be performing in a medieval play. Having attended Catholic schools from childhood through college graduation, my mom has read her fair share of medieval literature. She vaguely recalled reading Wisdom (“or was it Everyman?”) in a college literature class. Though not a huge fan of plays or musicals, my dad has been there for every one since I started local youth theatre as a child. I think he was prepared for just another play to attend. Even with my warnings of impending raunchiness and endless dick jokes, my parents still had no idea what they were in for. Where they expected a dry play full of whatever the mind conjures when it thinks of the Middle Ages—monks? Gregorian chant?—what they got was a wild, colorful, interactive game of audience and player, to a soundtrack of late 2000’s dance hits. 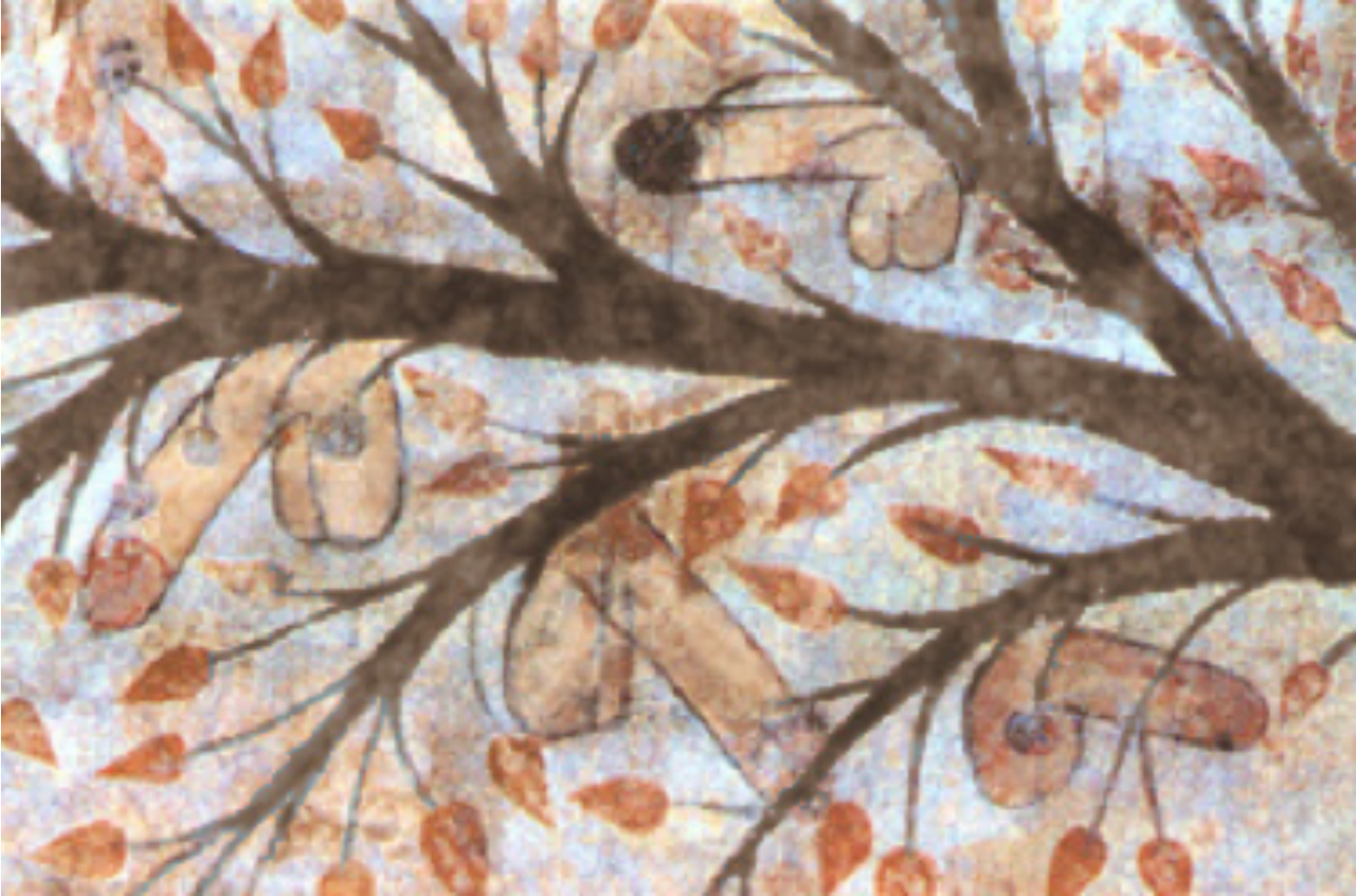 So, what’s the point of putting on a 600 years old show in 2019? For starters, we as a culture have a deeply entrenched set of images and ideas about what the Middle Ages mean. Think Game of Thrones, Robin Hood, Hunchback of Notre Dame. By contrast, our production of Wisdom combatted the highly religious, overly proper, even primitive imagery we associate with the period. It demonstrated a Middle Ages that was much more fun, sharp, and vibrant than popular culture typically assumes. We can catch glimpses of the fun medieval people had in sometimes surprising places. The thirteenth-century Massa Marittima mural in Tuscany, for example, features a tree growing penises on its branches. 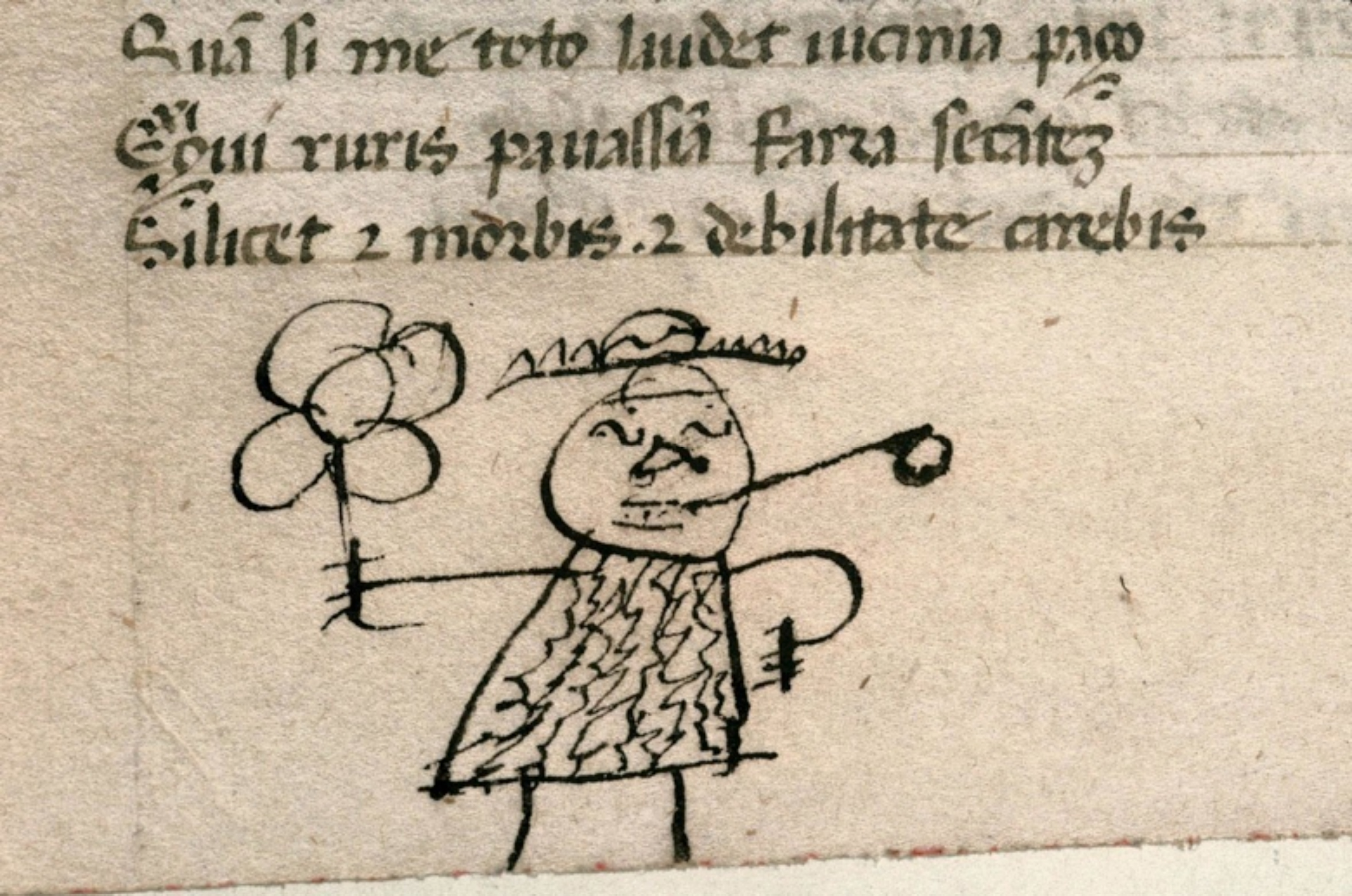 Here, a note in ogham script from a ninth-century Irish copy of a Latin grammar book, Priscian’s Institutiones grammaticae, translates to “death by ale.” And closer to the time period of Wisdom, here is a fifteenth-century doodle by a schoolboy in the margins of a manuscript containing Juvenal’s Satires, used to teach children morals. The raunchiest jokes in our morality play were taken directly from Wisdom’s original Middle English text. The weird pseudo-relationship between Wisdom and Anima? Our class picked up on it during our first read-through. And we were surprised by how directly parts of the playtext relate to contemporary questions. Take, for example, Perjury’s comments about money’s ability to buy a jury, about the rich getting away with all manner of crime because they have the money to pay it off. It all sounds a little too familiar these days…

Realizing these connections was eye-opening to me. We laugh at the same jokes and bemoan the same ills as the people who performed this play so long ago. Something about this bond across time is fascinating and comforting and very personal for me. It’s one of the reasons for performing plays like Wisdom: to connect with those who came before us and learn more about an era from which we feel disconnected in so many ways.

As my parents can attest, I’ve done “serious theatre” from the time I was a kid, even when high school musical directors screamed at tearful actors in front of their castmates over a single mistake and nitpicked the physical appearance of teenagers at their most self-conscious. I auditioned for college theatre programs, attended performances of “serious theatre,” worked hard to be a part of that scene. I loved performing in plays and musicals, and—don’t get me wrong—there are parts of the modern theatre world that I still really love. What we conceptualize as modern theatre does have merit and is skilled at telling certain kinds of stories, but it’s a problem when this is the only kind of theatre and the only kind of story getting told.

What we’ve lost are joy and fun as artistic objectives. That’s why I am so thankful to have been part of this production. From the first day of class, Dr. Albin encouraged an improvisatory approach to theatre that doesn’t see so-called mistakes as a failure but as part of the process and ultimately part of the fun. A missed line did not spell the death of the performance; we made no pretense about performing “serious theatre” and instead simply played a game that the audience was invited to join in and be a part of. As someone who struggles with anxiety and depression, it was incredibly gratifying and freeing not to have to stress perfection as the ultimate goal and to make mistakes without feeling as though I’d ruined our work. Rather, it was part of the process, part of the game, part of the fun: another reason for performing plays like Wisdom.

We wore glitter, we danced to late 2000’s dance pop hits, we yelled out dick jokes in front of my parents, who were less horrified than I thought they would be. It felt like we were throwing a party, and anyone who happened to wander past got roped in. This notion that plays are something to actually play with feels as though it has left our common awareness. Even comedies are held to perfection, and hidden behind some invisible wall of politeness. Look but do not touch; watch but do not truly enjoy. We busted out of that convention with streamers and glitter, surprising our audience with a different version of the Middle Ages than they expected, all while enjoying the hell out of ourselves like medieval players 600 years ago.