Though Fordham University’s Catholic heritage is no secret, not even John Gillis himself, architect of Lincoln Center’s plaza and elevator tower, could have predicted that the modernist structures he designed would serve as the perfect set for a medieval allegorical play.

Contrary to most other medieval English drama like John Lydgate’s disguisings or the Towneley biblical plays, the stage directions for Wisdom are unusually detailed. This specificity gave us insight into how the play was staged during the Middle Ages, yet was still vague enough to grant us the freedom to adapt staging to our own designs.

A number of stage directions call for audience interaction. For instance, the playtext tells us that Lucifer “takyt a schrewde boy wyth hym and goth hys wey cryenge” (seizes a naughty boy [from among the audience] and drags him off crying). Stage directions also call for six dancers to join each corrupted faculty of the soul, Corruption, Perjury, and Lechery. At one point, the playtext requires at least 21 actors to be on stage at once. With so many individuals on stage at once, we had to find a performance space large enough for the audience to inhabit and for the actors to move around, and intimate enough for the audience to hear the actors’ voices and interact freely.

In many ways, these concerns echo similar constraints and opportunities that medieval plays presented in their day. As Meg Twycross explains, medieval play-makers were also concerned with the problem of “insufficient voice… endemic to open-air theatre” (33). The more open the space is, she explains, the harder it is for voices to travel and for audiences to follow the performance. Some medieval dramatic groups addressed these problems by holding their performances on and around mobile, elevated stages called pageant wagons. Although the term “wagon” might give the impression of smallness and simplicity, medieval pageant wagons were anything but — pageant wagons could be 20 feet tall, multistoried, and elaborately decorated, playing a large part in the overall spectacle of the event. 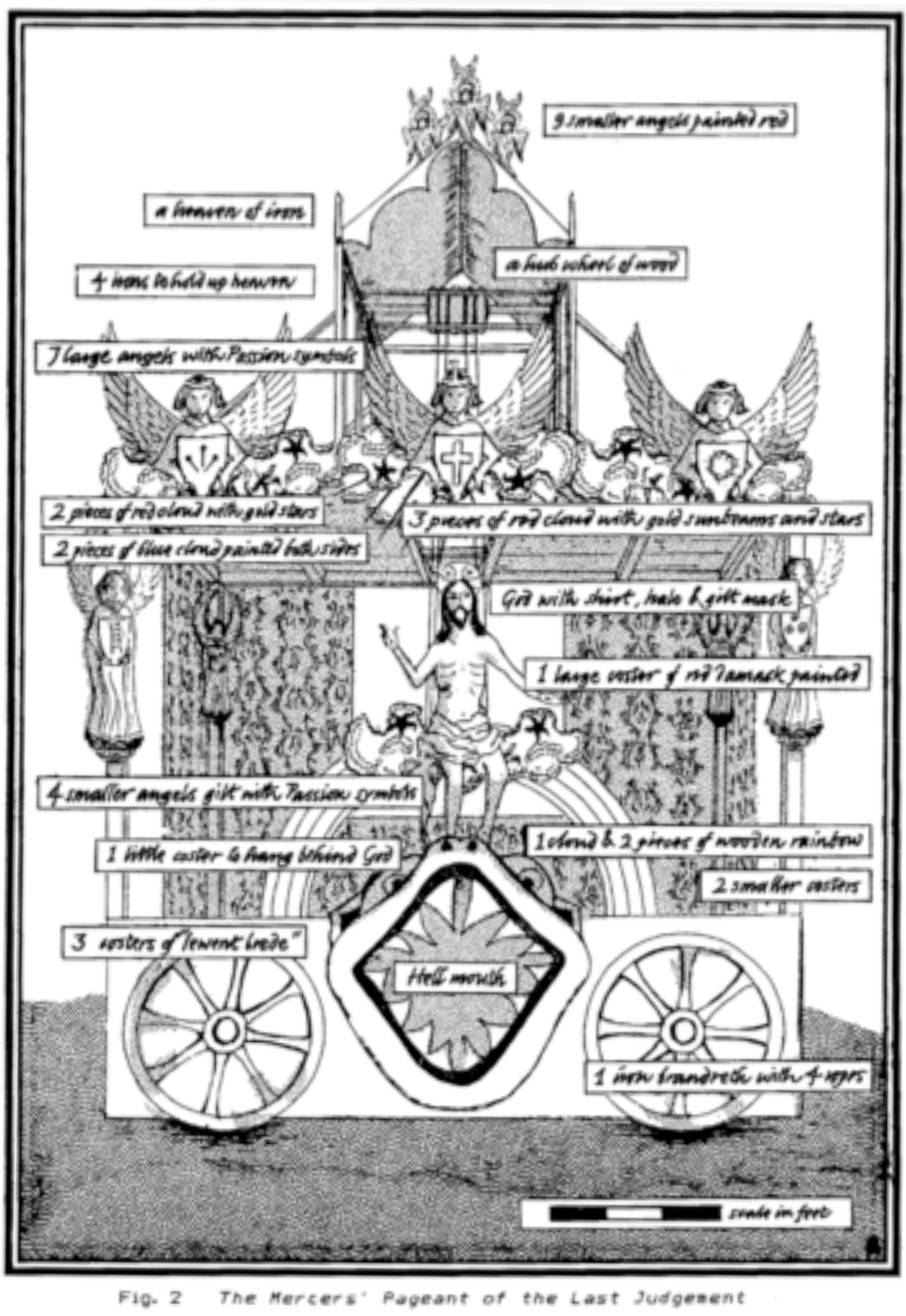 Though we didn’t intentionally design it this way, as the staging of our production of Wisdom unfolded, our chosen location at the Lowenstein street-level plaza slowly transformed into the layout of a traditional pageant wagon.

For reference, consider this illustration of a pageant wagon for The Last Judgment play. The pageant wagon is divided into three distinct layers: the top layer above the wagon roof represents heaven; between the roof and the floor lies the space of earth, where most of the action occurs; and wagon’s undercarriage represents hell. A vertical relationship organizes these three layers of the pageant wagon.

In our production, the location of heaven, earth, and hell echoes the pageant wagon’s layout, with some original twists. A traditional layout would place heaven on the elevator’s upper balcony, with earth and hell located on the ground level among the audience. However, our production of Wisdom was interested in portraying the play’s irony: Lucifer, the traditionally evil character, makes valid and truthful statements, while Wisdom, the traditionally heroic and virtuous character, often makes misogynistic and controlling statements. Our use of space likewise became ironic, with the upper layer coming to represent both heaven and hell. When Corruption, Perjury, and Lechery caused mischief, the audience could clearly spot Lucifer looking down from the elevator balcony, approving of the chaos she had created. 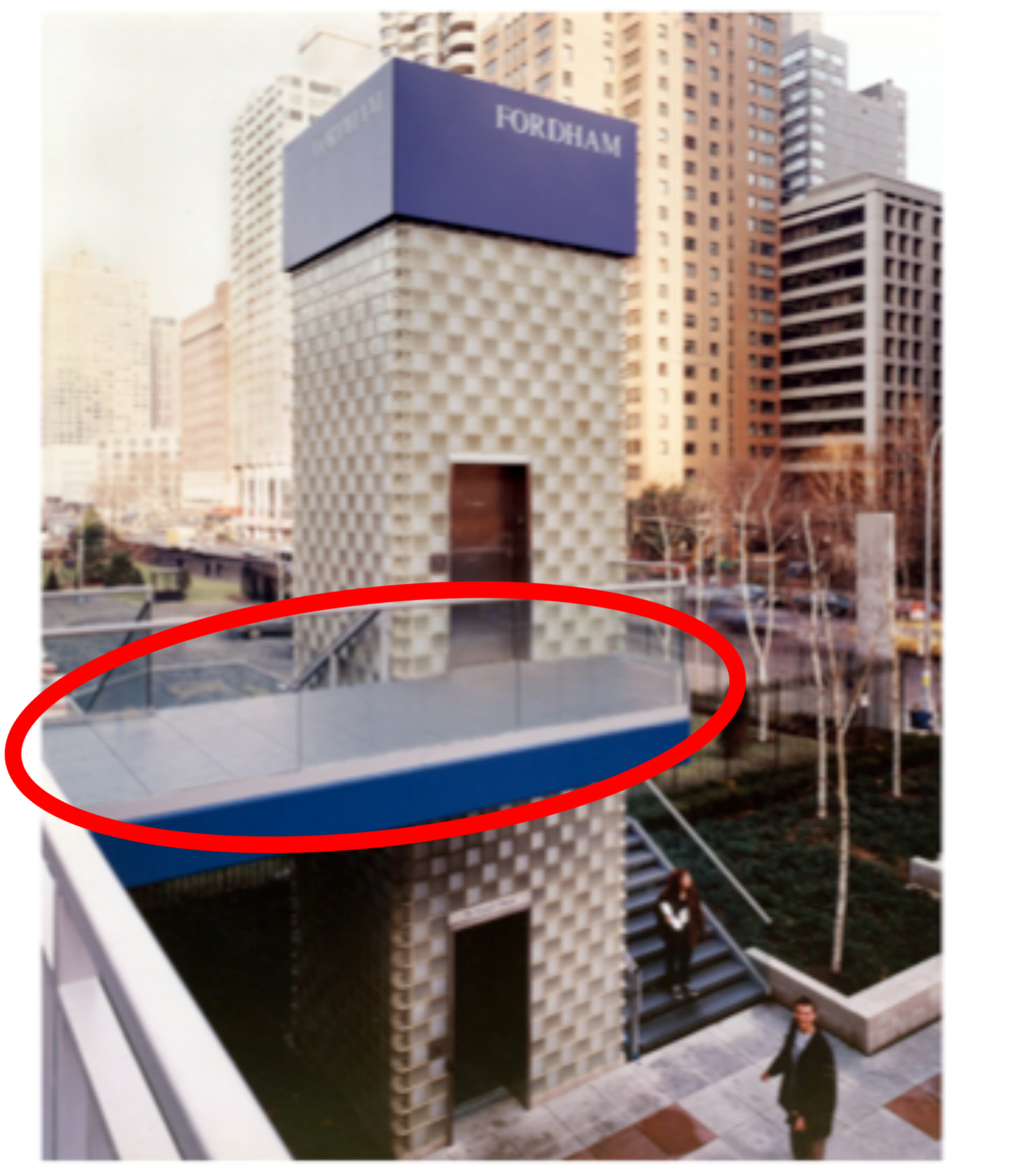 Our lower layer, representing the earthy space between heaven and hell, was located on the street level plaza in line with the audience. Although this put the actors on par with the audience, a deviation from the customary pageant wagon layout, because most viewers were seated on the ground, the actors still appeared to be on a higher level than those observing. Moreover, according to Twycross, acting on the same level as the audience was common in traditional medieval performance. In the Coventry Shearmen and Taylors’ Play, for example, the biblical character Herod uses the street as extra acting space, as reflected by the play’s famous stage directions: “Here Erode ragis in the pagond and in the strete also” (Here Herod rages on the pageant wagon and in the street as well).

Although street level acting was common in medieval drama, this style of performance incurred some difficulties. Scenes performed on street level tended to disappear, as the audience would have problems hearing and even seeing the actors. Because our performance space was surrounded by the college on one side and recessed from the busy traffic of 9th Avenue, we were less worried about the actors performing on street level. The actors’ vocal projection and physicality afforded them the performative power to successfully “fight to grab and then hold their potential audience’s attention.” They were easily able to maintain a “story-telling mode… [that] insists on the presence of the listener as well as the story-teller” (44).

Because of its technical limitations, Twycross also suggests that medieval street scenes were usually saved for special effects: scenes where devils run amok or apostles bless members of the audience. In fact, we incorporated one of those traditional “street level” scenes that Twycross describes, towards the end of Wisdom when Wisdom casts out seven devils from Anima. Unable to build a third and lowest vertical layer to represent hell, we instead created a horizontal layer: hiding behind the garden ledge (marked by the red circle below), we jumped out on cue from behind Anima, blowing on kazoos, opening confetti poppers, and shaking maracas, as we ran into the the audience. Since the ledge we hid behind was not very tall, the audience could have, of course, spotted us gathering behind the cement blocks. This transparency added a comedic touch to the scene, connecting it thematically with the rest of our production. In this way, hell was located not just on the elevator balcony but also on the street-level plaza, in the space of the audience.

Lowenstein Courtyard, Fordham College at Lincoln Center. Circled in blue is the elevator,
circled in red is where the seven devils hide before bursting from Anima. 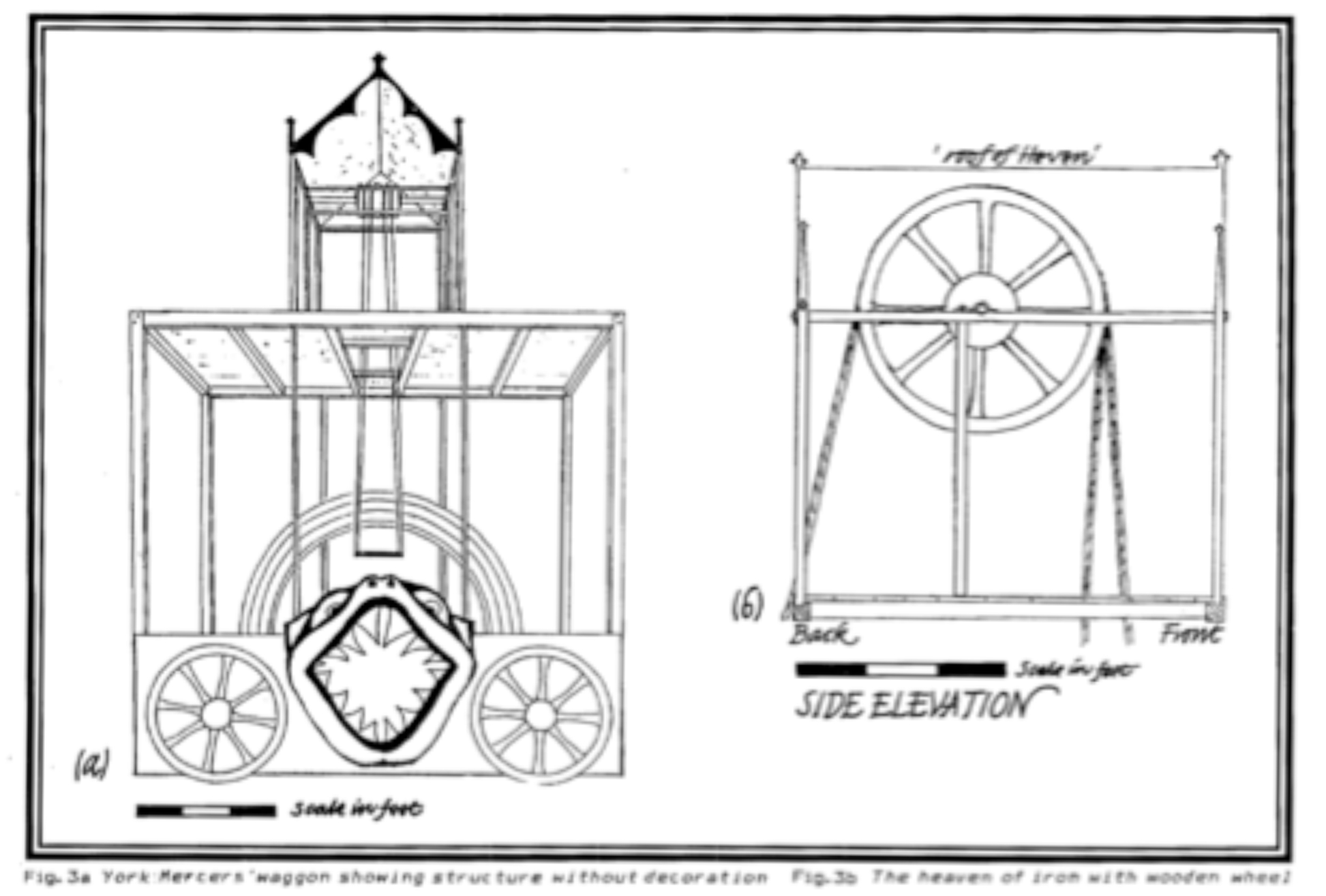 One surprising similarity to medieval staging practices was purely technological. Throughout the later Middle Ages, pageant wagons became more technologically advanced, with the additions of trap doors, pulley systems, and even automata to the wagons’ architecture. Unintentionally, but still worthy of note, our location paid homage to these medieval developments by using the tower elevator to raising actors up to heaven and hell on the upper balcony, much as medieval mechanical lifts would have done.

When we started developing our production, we knew we would need a space that could represent the allegorical and physical world of Wisdom. Surprisingly, Fordham offered us exactly what we needed. Not only did we have a space that catered to our specific requirements, we also had a space that mingled the old with the new—a modern-day pageant wagon.