The Wisdom of Cameras: Planning and Recording the Experience of Wisdom

Medieval plays, while having some sort of text with lines for the actors, tend to be highly improvisational. Unlike modern plays and films, medieval plays have few set actions for the actors. With a play like Wisdom, with so much freedom in character choices and stage action, the filming of the play was arguably the most constrained element of the production. In order to get as much of the play recorded as possible while not interfering with the audience’s experience, filming decisions could not be made until the play space had been chosen and the general scope of action in the performance determined.

My primary concern filming a live, outdoor play had to do with the location of the performance. Our performance was to be staged in a public space. Unlike an auditorium or indoor stage, outdoor space is anything but consistent. Assuming good weather on the performance date, the play space was still subject to all kinds of environmental impacts. We would need to anticipate the position of the sun depending on the time of day. We would need to decide how to frame shots in the moment, while making adjustments to the brightness of the cameras. We had to consider the placement of cameras, whether among the audience, roaming along the edges of the play space, or from a distant position overlooking the entire play and audience.

After surveying the play space, Fordham’s street-level courtyard at 60th Street and 9th Avenue, we decided on a two-camera setup, with one camera capturing the entire play and most of the audience from a distance, while another camera captured close-ups of the actors. These cameras needed to be positioned so as to capture the desired shots while avoiding incoming pedestrian traffic. An initial survey revealed several spots where a camera with a tripod could be stationed. Initially, we thought about placing the wide-angle camera on the elevator tower balcony, an ideal spot for easy access and high angles of the performance space. 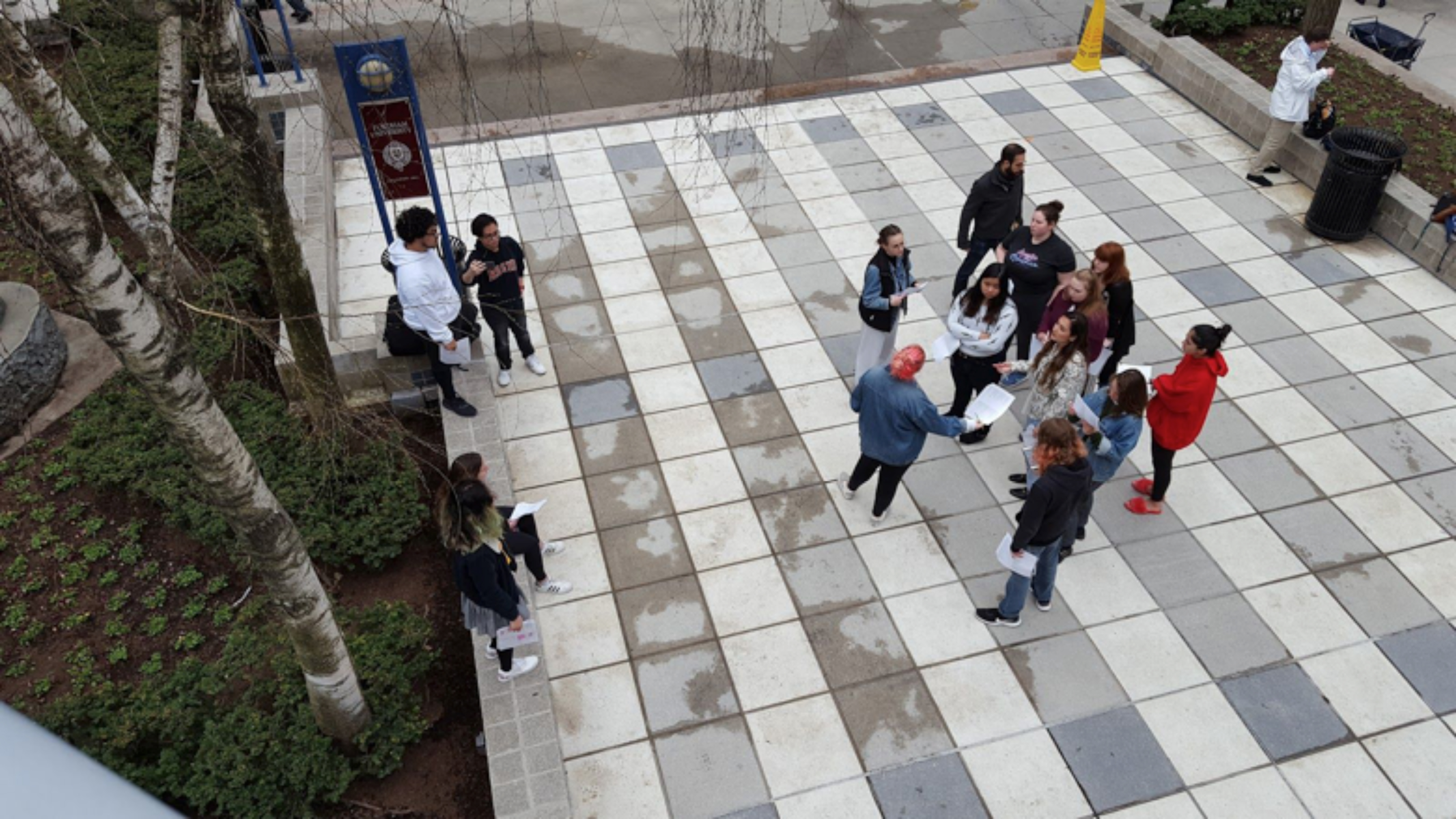 The biggest concern with this spot was the birch tree to the left of the photo above. While the tree was bare at the time the photo was taken, I worried that leaves would grow and obscure the view. A few days later, we started to see the leaves sprout from the branches and had to reconsider our choice. 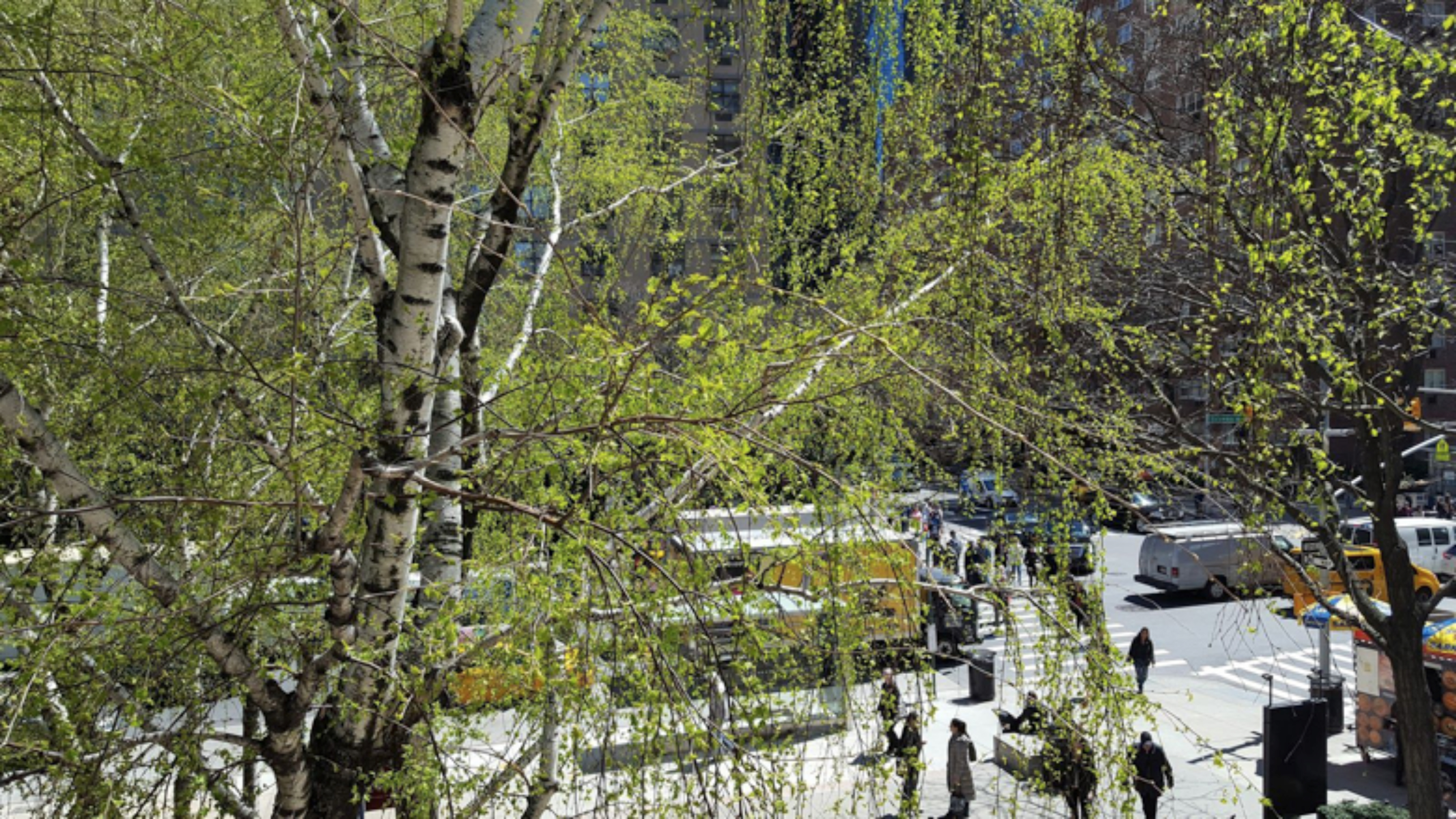 The next spot we considered was underneath the elevator balcony. Here, though, the camera could be blocked by pedestrian traffic. While medieval drama thrives on the presence of pedestrians, a recording could be negatively impacted if passersby obliviously stepped in front of the camera and blocked the shot. Finally, we considered a location not far from the elevator balcony, a second-story garden space directly above Fordham’s street level entrance. The biggest concern here was the tripod’s getting stuck on the vines and falling over the railing. Still, this spot had a very good angle on the play space, audience, and sidewalk. While the elevator balcony was a more secure and stable position, we decided to opt for the spot instead for our wide-angle camera.

For the camera filming the play in close range, we decided to have Kevin, the other cameraman, track and follow the most important characters in each scene. After testing out different angles, positions, and distances, we agreed that he should film medium and close-up shots from the audience’s perspective. Because he would be carrying the camera for the entire duration of the play, Kevin tested out different way of holding the camera and how each method would affect the shot.

Finally, we decided how to take best advantage of our two-camera setup. Half of the recording would be seen through the eyes of the audience while the other half is seen from a high angle, offering a general overview of the performance so that viewers could see the audience participating with the play. Kevin captured as much of the actors’ faces and actions as possible as he walked among the audience, while I tried to get as much of the performance and audience reactions with as much detail and clarity as possible.

Unlike conventional films and play recordings, it proved almost impossible to accurately storyboard Wisdom. In traditional film shoots, there is a degree of control over lighting and acoustics, even in an outdoors setting. If a mistake occurs, the cast and crew can easily redo the shot. Our environment and our performance were much more challenging to plan for. We decided to make a list of basic guidelines on how to shoot each scene, anticipating the important actions we would have to capture from our observation of rehearsals. Depending on the action, Kevin would either zoom, pan, or track the characters. I adjusted the overhead camera every so often, depending on the shot, zooming in occasionally, in an effort to follow the action. Tracking, zooming, and panning mimics the shifting attention of the audience and asks the viewer to focus on certain actions and people.

Of course, a recording is not a replacement for experiencing the actual performance. The viewer will not be able to dance with the actors or experience the rawness of the improvised interaction. However, if framed and edited effectively, the viewer of a recording should be able to follow along and understand what was going on during the actual performance. If, for example, both cameras had recorded from the perspective of the audience, the viewers might have felt more immersed in the performance, but how would they get a sense of scale without being able to see everything? While the overhead camera does not inhabit the audience’s point of view, it does display the entire performance space including the audience, who are crucial collaborators in the performance of medieval plays. In the end, it was clear that our task was to focus on the play and to show how the play was affecting the audience, so both overhead and audience perspectives were necessary.